View From an Ohio Bunker 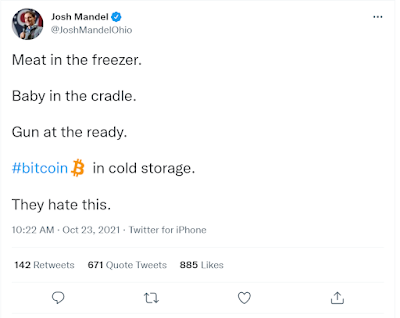 I've been following the Ohio Republican Senate primary with interest because it really feels like a dance-off between two jerks with no rhythm. J.D. Vance is an appalling try-hard, no question, what with tut-tutting the child-free and musing over the ridonk boss Tweets Trump would make in the wake of an actually human person being tragically killed in an accident with liberal Alec Baldwin involved. Because of course, Trump is known for making comments that aren't at all disrespectful, unkind, or outright hurtful. (I mean wait--he is: why do we need that right now, exactly? While people are actually shocked and grieving? To own libs? Or because the faithful need callouses to build up over their human-feeling parts so they can sink still further into deplorability?)

But Josh Mandel is a special little culture warrior, and from his bunker (under, I presume, freedom's anti-vax cornfield) is suggesting libs (they!) hate "normal Americans" for eating meat (my husband is a meat cutter--I learned that vegetarianism interfered with my drinking so I had to give it up), having babies, guns (I just recommend keeping the babies and the guns in separate spaces is all, we have guns) and for some weird reason, hashtag bitcoin.

Oh man, I really hate hashtag bitcoin. It's the woooooorst. Hyping assorted forms of funny money that real people invest actual money in feels like a really grifty economics LARP to me. But I see Mandel is committing to his bit, and his bytes.

Look, I don't know that his post is supposed to be some kind of Red Dawn survivalist fantasizing, but it really comes off that way. So, first off, babies, useless in a crisis. Actually require total hands on care. Can't shoot straight or even shit where you want them to. They're really like a status item for people whose shit has not actually hit the fan. Where are you putting diapers in a bunker situation, or how are you even cleaning them?  In case of apocalypse, please consider family planning for the post-apocalypse.

Your meat in the freezer is great, if your electrical grid is working. Otherwise you might want to sort out how to do pemmican or other dried or smoked preparations. Obviously, big vat o'dried shit is going to be worthless because one of the first things to go, if not the internet or electric grid, will be access to potable water at all, let alone clean water to cook extremely dehydrated stuff with.

But if your money is in bitcoin, I'm afraid you builded your house upon sand, because even if your internet connection somehow works in case everything else has turned to liquid shit, what are you exchanging that for, when really clever people would have invested in canning, pickling, distilling, can openers, and assorted water filtration systems? Please accept my digital pretend money in exchange for a jar of pickled beets, which you can not really use, but might be able to exchange with another person who has a functional internet connection because of course none of those trust systems have broken down.

But before the worst-case scenario, one thing actual not fucked in the head people would do is invest in good government made of for and by the people that ensures that things like the lights and internet and water stay good, and resist actual wars or apocalypse-bearing shit because they are bad, and just like our cavepeople ancestors, we would require collective action to endure.

So go ahead and have meat, guns, babies, bitcoin, whatever. I don't care. I just don't understand what the significance is. I don't hate it. But it's very weird signifying. And I find Mandel really weird.

I used to harp about how everybody's all hot for revolution but no one has any idea what to do on the other side of one but ... Cassandra's Grandson, got tired of nobody listenin' and quit. Appears, however, to my delight, to be a double-edged sword.

I thought Red Dawn the First was a great training exercise. At the time sitting quietly on a sack of seeds as my neighbors were making damned fools of themselves wallowing in the national spotlight, raising four kids alone sixty miles out of Missoula Montana, teens and tweens ... I told 'em "kids! this is not how you do it."

Can't speak to the Second other than I've been in and out of Seattle since I was a twelve year old runaway ~ 1967 ~ and uhh, I just don't think Seattle is where The Revolution is going to down.

A friend once told me, "You never get the revolution you wanted", based, I suppose, on their read of history. It's sounds right to me.