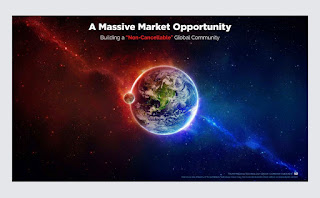 I don't know exactly how to explain this, but when I smell a grift, it somehow smells to me like other people are smelling burnt toast--does that make sense?  Anyway, the former president has launched a Space!! Fooooorce!! Distraction!!  social media company which is not either coming out just now as a distraction from other stuff on his plate and totally isn't in line with a certain real estate mogul's penchant for glossily overselling and over-promising things that are...not great, actually.

The hype says it's going to be publicly traded (hello world of regulations that Trump doesn't usually deal with!) and the hot property TMTG is "valued at up to $1.7 billion".  Up to.  Four little letters just doing their damndest, right there.

Anyway, the social media platform, which is competing with Twitter, Gab, Parler, Gettr--it's called Правда, I mean Truth, because Trump and friends could still see irony twitching a little bit and wanted to shaft that SOB for good. The business model is "We're going to fight the tyranny of Big Tech by becoming the same thing, only more so." The whole thing feels to me a little like Jared introduced him to some friends that were doing neat stuff with the cyber.  They will also have non-woke streaming programming so it's going to be a fully-integrated self-contained digital TrumpWorld echo-chamber, if it works.

I am...skeptical. But I like the backwards planet graphic used in the marketing packet because it really feels on point.