TWGB: Wild at the Willard 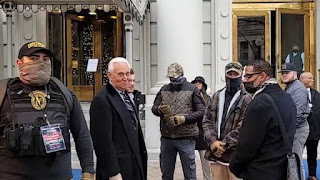 The fantastic Washington Post story regarding the "war room" at the Willard Hotel is a great start for the public recognizing that several organizations, and members of congress and close Trump associates, clearly were together before the 1/6 riot planning an insurrection. The Willard was a who's who of who's insurrectionist. It was a Trumplandian Woodstock. Flynn, Stone, Bannon, Giuliani, Eastman. Bernie Kerik was there. OAN's Christina Bobb was there, like a whole pretend journalist wearing her campaign lawyer hat. There was activity working on state legislators to see what they could do to overturn the results in their states. They were working on US Members of congress to see that they would reject certain states' electors.

(I think there have been folks who also need to be pointed out for having seen the connection to the Willard Hotel, like Sandi Bachom, and Seth Abramson. Follow them on Twitter, you guys, I do.)

Anyway, activists who were in the loop have been talking, and it sure seems like GOP members of congress and folks from the White House were all over the events of 1/6, according to Rolling Stone's reporting.

Now, this doesn't really strike me as much more than Ali Alexander has been saying all this time: there was coordination all over the GOP. The more interesting details to me are things like Rep. Gosar actually holding out the idea of a blanket pardon to potential malefactors (which never materialized) as if to magnify on Trump's one-time promise to pay the legal fees of people who "knock the crap out of" protesters. The assurances that Mark Meadows was 100% in the loop, demonstrating that the White House would have been aware of the rough edges of what could happen (or were they even more aware than roughly? Which makes the delay of the DC National Guard being called in really suspect, no?)

But let's look at those very involved members of congress, right? Marjorie Taylor Greene, who seems to have some kind of personality disorder, Madison Cawthorn, who looks like he's 18 going on 1933, a homeschooled congenital liar who can just about spell his name, Andy Biggs, who, like Paul Gosar, has actually been castigated by his family for spreading seditious lies about the election. Mo Brooks who gave a speech with a bulletproof vest because he was tipped off to trouble on the horizon. Lauren Boebert, who Tweeted "Today is 1776" that day.

It really seems to me like Kevin McCarthy has thwarted and opposed the very reasonable investigation into the events of 1/6 because he understands full well that it is verily full of his colleagues. Instead of merely catering to and coddling his Freedom Caucus contingent, as John Boehner and Paul Ryan did before him, he's in the position as a Minority leader of covering up their potential criminality if not treason.

Which is wholly his choice; a quandary he could break out of at any time by merely electing to do the politically damaging but democracy-preserving necessary thing: call his own membership to account. But he won't, and it's so bad that: what's even with this Jim Banks pretending he's on the 1/6 committee thing? That really feels like he wants hold of information because they want to have a "counter 1/6 Committee".  Like they can discredit what actually happened that we all saw and have been seeing since even before Trump LLLLLLOOOOOOOOOSSSSSSTTTTTTTTT the 2020 election?

I would like to see every last seditious scoundrel in leg irons and eating a lifetime supply of the worst porridge. Or something. I mean anything. Because this was apparently a calculated attempt to steal the election from Joe Biden, And from all of us who voted for him. 81 million or so of us. We Americans. And they wanted to treat us like we weren't citizens because we voted, to their way of thinking: wrong.

Trump is an incompetent morally and literally bankrupt whore-mongering mafia-adjacent malignant narcissist piece of exceptional racist and misogynist trash. A procurer and enabler of other criminals, a shill of Putin. And this is who the GOP threw away whatever credibility they had for. The shame. The shame of it all. And yet they could endure even this, and yield even further more robust pieces of this kind of nightmare human as political candidate.

Everyone wilding at the Willard needs to get inspected and corrected. That's all I even can say about that.

Gmail is one of the most popular webmail services among users owing to its numerous features, one of which is the ability to restore a Gmail account.
-------------------------
Gmail Bellen