It's The Public Health, Stupid

President Biden made some important steps just now to try and end the COVID-19 pandemic which is, thanks to anti-vaxxers and anti-maskers, becoming more of an "endemic" problem here in the good ol' US of A. He has mandated COVID-19 shots for federal employees and contractors and large employers (100+ employees) and expanded testing regimes. This is actually a great start--we had a chance for people to voluntarily choose to take shots that would protect them from severe disease (given that breakthrough cases might still exist because--variants, but that spread of the disease only increases the risk of--variants--like the Delta variant that is ripping through the latest wave, and now we're hearing about Lambda and Mu, both believed to be more immune-dodging buggers).

Some didn't take that chance, and even patted themselves on the back for not doing it. Now, anti-vax grace period is over, and if you special little people want to be employed and to travel and whatnot, get your whole special asses with the program and get the shots. That's right. Because the majority of us are vaccinated now, and because of you, we can barely have nice things. And we've fucking had it.

Needless to say, the Republican sociopath slow genocide squad started bleating about their freedumbs at once. Ohio Senate Candidate Josh Mandel stood in a cornfield in front of a Trump sign and had a very natural one, which for some reason I find endlessly hilarious.  Yes, don't comply with tyranny. Shoot the vaxstapo if they come to your door! This is normal stuff to say! I am not a crank!

And the funny old thing is, I don't think Mandel is an actual crank. I think he's a political opportunist and has boosters with his morning coffee and just doesn't give a fuck who dies. He definitely triggers an obvious bovine fecal aroma alert every time I check in on him.

But this is the Trumpublican party line, right? The hardcore Trump guys are all in for antivax. Like the ratbastard Flynn clan, who are pimping sheep drench. Even the Chinese fuck whose yacht Steve Bannon got arrested on is all up in the antivax shit.

And you all could ask why, and the dry eye reason why is Republicans can afford to send masses of red state bodies to wingnut Valhalla for the culture war. And they'd still win elections there. And that's pretty Leninist of them. Let's give them a tankie golf clap.

Anyways, so even if definitely not an authoritarian asshat Greg Abbot wants to now invoke the "right to choose" for Texans (uh no, sonny, that's what Merrick Garland is trying to ensure, not you): 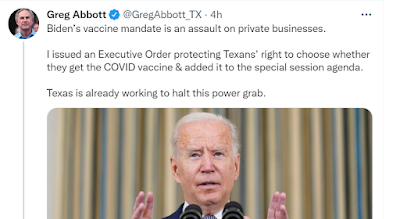 and other Republican nihilist death-eating sonsabitches want to tussle with the mandates, actually still and all, it's about the public health and there's precedent.  Vaccine mandates are as American as cherry pie.  And I cannot tell a lie about that.

Regardless of the lies others spread, the kind that get people killed. The kind that have already resulted in so many unnecessary American deaths, as Republicans have told for purely political reasons. Because that kind of evil is just beyond me. And well beyond Joe Biden, who just wants you not to die, God love ya. Not because the unvaxxed should be punished, but because he doesn't want Americans to die. How much more simple does it need to be?