Dressing For Your Salad Bar? 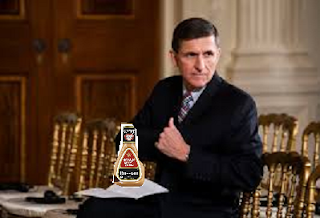 Because this actually is kind of wild, COVID-19 disinformation-spreader (among other weird pursuits) Mike Flynn saw a thing about how the weirdos were going to spike the salad dressing with vaccines because that's obviously how capitalism is doing these days. The salad dressing industry is definitely in the pocket of Big Vaccine, controlled by the Harris/Biden syndicate. They're out there making innocent condiments into tools of statist control over your precious bodily fluids. Next thing you know they will be regulating your testicle size via ketchup, see if they don't!

Ok, so he got what he saw entirely wrong in every respect--there is a thing where mRNA can be bred into plants so that can be a more useful way to produce and store vaccine supplies. but no one is trying to Caesar Surprise folks into swallowing a vaccine without knowing what's up.

But because someone like Flynn, for whatever reason, is listened to, he might make people a little nervous (more nervous, actually) about getting the vaccine. Because why would people be so sneaky about it if it was totally fine and safe--sounds hinky, right? That's what the disinfo game is about--sure it sounds wild and weird to normies. But if you are already clued into that frequency, you want to believe, and totally weird shit stops sounding all that weird to you because you are hearing at least that level of weird like, all the time.

So we get guys like this one: Lt Col. Doug Hague, who ain't gonna get a COVID-19 vaccine, because FREEDOM! He got all the other shots, but this time, it's a whole thing. He didn't even realize it was about freedom until like, just now. I wonder why he never saw all the anthrax shots and all that before as a problem, huh? (And is he thinking he will have songs sung to his honor in Wingnut Valhalla, because of course he very well might.)

It reminds me a little bit of Lt. Col. Terry Lakin. The dude lost everything over birtherism, and it remains the dumbest thing I can imagine. The actual Commander in Chief at the time was obviously born in Honolulu. There was ample proof. But this dope preferred court-martial and the loss of benefits he accrued during his long service. He served five months at Leavenworth and lost his medical license.

And this weird-ass opinion wasn't even apparently all that weird for people who served. Every single part of birtherism is intricately stupid and racist. Why and how would Stanley Ann Dunham be anywhere else when exceptionally enceinte, and very young? (Show me the plane ticket!) And her being a US citizen, her travels amidst her travail wouldn't have even mattered with respect to baby Barack's citizenship! The whole thing, start to finish, was bullshit! (And one Trump promoted, so let's also think about that a lot.)

And yet--because brains soften under the deluge of constant stupid conspiracy theory, I guess this kind of batshit breakthrough infection even pervades a person who should know better. That's why the saddest you will ever see me be for little old 120 lb racist MAGA terrorist Ashli Babbit is that the brain-washing put her where she never had any business being--but I will never relent that she drove herself to that outcome.

The world is your salad bar, and you choose how you dress it. And some people out here are ladling bullshit over every tasty or nutritious thing.

As a point of interest: Did you know John Eastman who wrote six pages of insurrectionist dreck that nearly got enacted in the Trump coup also wrote some birtherist drivel about VP Kamala Harris? Yeah. Now, before we just accuse the SOB of being a racist motherfucker, let's entertain that he's actually just a hyperpartisan hack. Which in practice is so barely different from racist motherfuckery on the right that I guess the general criticism should be let stand. But what if he was just a hyperpartisan hack though and reality really didn't matter to him any more than all of our shared history as a nation and he only just wanted really authoritarian conservative assholes to be president? Wow. And that's the work product of a whole ass fascist. Based on mere kernels of the literally most stupid conspiracy theory shit?

Good for him. Bare-assed idiots rarely rise to such prominence through naked incompetency. But he persevered in his stupidity. And believe me, it matters! Because depicting your legitimate opposition as ineligible or illegitimate is so totally an authoritarian theme! Way to do scholarly example, my dude!