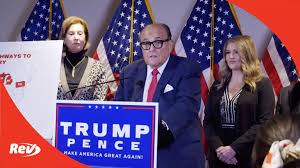 I'm not actually a lawyer or anything, but when it looks like US senators who looked into the voter fraud claims entirely noped out of challenging them a la Ted Cruz or Josh Hawley, maybe they weren't good claims at all. In fact, it turns out that the Trump campaign knew that all the Dominion claims were totally bunk back in November. You know, when the election happened, before the Stop the Steal rallies and all the Elite Strike Farce lolsuits and all that. We didn't need to go through all that. It was just a time and money suck for idiots to save face and reap fundraising.

And as far as I know, the fundraising on utter lies is still happening. So. That's a thing that MAGAs are entirely supporting. Getting bank account molested by total liars. With weekly auto-withdrawals and lies about matching funds and shit, no less.

They knew that all the Chinese thermostat and Italian satellite stuff was bogus way back in November. But they needed time, because they had a little plan--from Claremont Institute's (and former Clarence Thomas clerk) John Eastman. We got a draft's version yesterday, but apparently, there were six pages of misguided bullshit about how, maybe, Mike Pence could have just stole this shit for Trump. Because if now now, when, and if not us, who, and also more Flight 93 Mike Anton type bullshit which I already said was basically terrorism to democracy.

And the thing of it is, there were still members of congress on board. There really still were. Ted Cruz and Josh Hawley and so on. Were they clued in to the larger scheme? I assumed because the claims were so obviously ridiculous that they were just pulling a political stunt for the punters, but this is actually more deep than that, isn't it? I wondered about the "misdialed" calls from Giuliani and Trump to Mike Lee, apparently intended for Tommy Tuberville, and wonder. Did the White House/Trump campaign think there was already more buy-in--or where they using thug force to manipulate it?

I still think there was a stupid hope by the Trump White House idiotariat that if an actual siege was deployed to try and threaten these lawmakers they'd be more compliant with a coup plan, and if I was one of those lawmakers, I'd probably be mad, but my ability to be mad at strongarm tactics by petty thugs is probably why I'm liberal in the first place.

Anyway, Trump is, as foretold by the oracle, busy and fixing to be more broke. Like, he has multiple loans due and his businesses are not doing great, and I'm also not a business expert, but if you overvalue your properties when you take out a loan, you probably will get your ass showed out when it comes due especially if you by word of mouth poisoned your brand by being a public bigot and kind of a stooge for Putin or Erdogan or even Kim Jong-Un because you have no idea what it's like to represent a great nation because your idea of greatness is sort of recursive to your own default mental hang-ups about masculinity and the definition of "winning".

Right now, Sidney Powell is defending herself by lashing out at Democrats claiming that people have been murdered over this election, Shades of Seth Rich. Some people claim that patriotism is the last refuge of a scoundrel, some would say religion is. As a Q-adjacent asshole, Powell could claim either, but is now going in for drawing a grieving family into her assholery. This disinfo/deflection is a Flynn shop specialty. I have no problem calling them basically traitors.

So, we know that all the Elite Trike Farce Folks should be really raked over by their Dominion defamation suit and also should not ever practice law again because OH! the very serious false statements. (I don't know--I think this kind of public fraud should be somehow criminal.) But what of Trump himself?

He's hard up for money and can't do Cameos or ads for My Pillow, so he's suing his niece and the New York Times over their expose of his tax information. That's stupid. I mean, there's this thing called "discovery". And like, I get that in his better years he was a notorious vexatious litigant with the resources to end people before they got started, but these ain't those times anymore. This feels like he's trying to front being in a fight for clout (more legal fundraising) but actually, he's flailing.

In other news, two GOP politicos got indicted for funneling Russian money to the Trump campaign and the RNC, and that's not even news news, because the Fruman/Parnas thing is probably bigger, but yes, the RNC did not care where money was coming from. And you know the Trump campaign had no problem with foreign (Russian) money because Trump never did.

So you can miss me with the significance of the Durham prosecution of Sussman--the real deal was that the Russian investigation was still never a lie. The Senate Intelligence Committee gave us volumes of reasons why that was still a very real investigation. But I know Trump fans do like their lies. And Trump always had them.