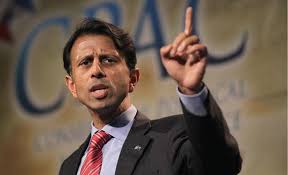 Damn. I had Santorum next on the 2016 Death Watch, but I guess it really is time that Jindal, who was making no headway at all, hung up the old campaign. In a primary that has really outside figures like Trump and Carson who sort of burn up all the oxygen, getting attention is hard enough, but Jindal never seemed to really find the right red-meat tone. He once took on the "stupid party", but in the end, they took him in, and they took him down.

I don't think his run did him any favors in his state, or made him look any better for a possible 2020 go at things. I'm still for Santorum as a sooner rather than later exit, but Graham's support is probably more vaporous.