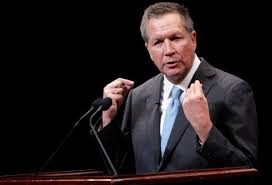 You know, I think OH Gov. John Kasich has come as close as there can be to being the "reasonable man" on stage in primary debates. He's informed, compassionate, and except for a little signifying, not overtly doling out pandering horseshit.

Which is why this business with creating an agency to dispense Judeo-Christian memes to countries he deems could use them is a hot mess. Remember just a blog post or so back when I mentioned that Ben Carson's adviser, Gen. Dees, was in favor of militarized missionaries? Well, that sort of thing is actually not allowed by military convention--US soldiers are not to proselytize.  (It's bad enough when heavy proselytization is used on the troops themselves.) We have this funny old thing here in the States about church and state separation, despite the best efforts of people like the head of Ted Cruz' SuperPAC, David Barton, to pretend it is not a real thing. An agency like the Office of Faith-Based Initiatives, created under President George W. Bush, is questionable enough--but even that office recognizes the Establishment Clause and steers away from proselytizing.

This proposal does not. It specifically mentions "Judeo-Christian values"--implying that any other values of any other creed must be less-than. (I've recently mentioned on Twitter that "Judeo-Christian" is such a passive-aggressive phrase in that the third Abrahamic faith is, intentionally, silent.) It specifically would be geared towards spreading "Judeo-Christian values" to--whom? The poor benighted boogers of lesser faiths who don't have values that Kasich recognizes as "correct"? Why, that is tremendously paternalistic and really likely to make people more pissed off at our colonialist mindset!

Yeah. I had a little respect for Kasich, but, while this idea might sort of woo evangelicals, seriously, if there was a way to peel them off of Carson and Cruz, Huckabee would have tried it. I think it's a turkey, and as God is my witness, I do not believe turkeys can fly.