Lynn Westmoreland: The Woman Tempted us and We Did Bite 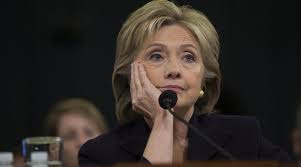 So, since I've been doing a lot of posts about the 2016 GOP contenders, I think it makes sense to do a post that is not about them--and this little piece of, I guess, revisionism, made me giggle.

Last month, Clinton testified before the GOP-led committee investigating the 2012 attack on the U.S. consulate in Benghazi, Libya. The hearing stretched 11 hours and was widely seen as a bust for Republicans.

“As you know, some of you may have watched the marathon Hillary Clinton fiasco, and I say that because Trey Gowdy, the chairman of the committee, wanted to interview her in private, and she said, ‘No, I want to do this in public,’” Westmoreland said in a recent speech uploaded to YouTube.

“Now to me, that was us stepping in a trap because we should have known that she was going to go on and just stall, debate, filibuster, on these answers to make it go as long as possible, so we would look cruel,” he continued.

So, she tricked the entire House GOP by requesting the transparency to put the hearing on camera, which somehow drew this out to eleven hours, to make them look bad?

Okay, player. Now, I've seen some funny revisions of what went on--after all, I picked on poor Childe Luke the MTP Dauphin regarding his silly-ass "both-sides" take.  Chuck Todd did a mildly better job at the same kind of both-sides sheep-dip operation.  But the last I checked, Trey Gowdy was running this travelling show, and that basically makes him quality control for the snake oil that results. He can't blame Clinton for how long the thing went because--his team were the ones asking the questions. They could have asked any question with whatever relevance they wanted. But they asked the ones they did, and acted like right gits in the process, as if they had never been on the television machine before.

Rep. Westmoreland is hoping his hearers are at least as, if not more, dumb than congressional Republicans. I'm not sure how that's even possible. But actually being pissed that the foxy Madame Secretary outsmarted all of their asses? (He's the one saying that.) That's priceless.
at November 17, 2015