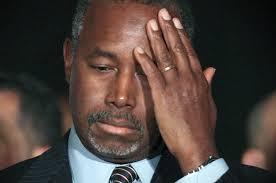 I think it is not actually a great sign when a foreign policy adviser to a presidential campaign is featured in a story indicating that said candidate is "struggling" with foreign policy and these words are said:

"Nobody has been able to sit down with him and have him get one iota of intelligent information about the Middle East," Duane R. Clarridge, a former CIA official, told the newspaper. Clarridge added that Carson needs weekly conference calls to brief him on foreign policy, so "we can make him smart."

Are we talking not being an iota short but actually being at the not one iota point? See, I'd like a president who is not iota-deficient.

It's okay, though. His one paid national security designer, retired Maj. General Robert Dees, says that Carson has "the right stuff".

That's reassuring. So, Duane R. Clarridge, it's been awhile since I heard that name. He was in the CIA when the Reagan Administration was running a covert war in Nicaragua. Solid resume. Also Gen. Dees is a fine character. Remember when I posted about Jerry Boykin? Well, he's sort of in the same vein. He wants a sort of militarized missionary squad carrying the Gospel as a part of their arsenal. So, that's not obviously problematic.

So fine. He's struggling, but he's trying. We can't all be like Donald Trump, who can actually feel when terrorism is going to happen. That must be very interesting for him. I have a knee that acts up when it's going to rain.
at November 17, 2015