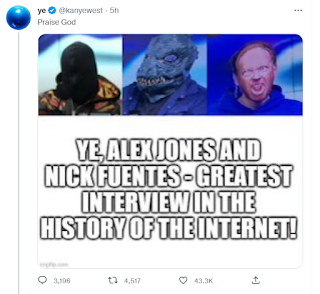 Today, the artist currently known as "Ye" went on Alex Jones' show and made a man who owes about a trillion dollars in defamation money and has only ever doubled down on his assholery actually become very uncomfortable like "Okay Jewish space lasers and Jewish weather machines we can takl about, but this shit--this is too far!"

And just like with the infamous dinner with notorious edge lord former president Trump, Ye brought Nick Fuentes, who the Balenciaga-balaclava'd rapper really seems to like.

But not as much as he likes Hitler, amirite? I mean, we have known this, but he was just blossoming with love for the guy who apparently invented highways and microphones.  And whose culpability for the Holocaust is just, like, your opinion.

Don't get too deep into this. Yes, this is a racist man who happens to be Black. This is a conspiracy theorist spouting nonsense. This is a disturbing glimpse into the faux-cancellation/Streisand-effect pipeline, where admonition raises a profile enormously among the exact people you would rather not be subject to 1) disinfo and 2) anymore reason to ignorantly pill themselves over some bullshit.

But I don't think I'm reaching too hard to point this one idea out: Ye is obviously grasping onto fascism/Hitler/Trump as a way to express where he is right now--hating. He wants disapprobation. He wants revilement.

And as for me, Wilco.

But to get where he is, you have got to be astoundingly uninformed. Like mind-bogglingly dumb. Like flat-earth-accepting, how the fuck do magnets work dumb.

And it's okay. the dumbasses walk among us all the time. It's when people live their whole lives and never read Clockwork Orange or know what the movie is about and decide it's about something it isn't and don't know Stanley Kubrick is Jewish.

Or maybe he knows better and decided not to care. Fash aren't fans of facts.

People can excuse what Kanye West is doing by talking about his apparent mental illness or divorce or whatever. I think he's just dumb and recognizes he gets attention for being dumb out loud and on purpose.

But this is really not a long-term pose and also, too, nice job giving up on Parler--after the careful cultivation by Candace Owens.  I don't think we need to see or talk about him anymore.

Hitler would have lost no sleep sending Ye off to the gas chambers. After all, the "Master Race" didn't include black people, regardless of how high Ye wants to elevate Hitler. He would have been sacrificed on the altar of racism. I just don't get why Ye doesn't understand this, but as you've said he isn't very bright...

That asshole can just Ye himself right out of my house. I don't know why even are talking about him.

Before his divorce, he had Kim and the rest of his in-laws to advise him on how to handle the fame and scrutiny, and kept him from public embarrassment. Now those guard rails are gone.