His Dinner With Kanye 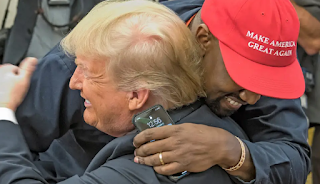 When you put all the pieces together, it feels like the attention-whore trolling event of the season--Ye, the artist formerly known as Kanye West, goes down to Mar-A-Lago with Nick Fuentes, the Groyper berk from AFPAC, pretty much as his plus-one. And Trump is going to conveniently forget that even he thought Kanye went too far in his anti-Semitic statements not that long ago. And he's going to pretend he doesn't know who Nick Fuentes is--just like he once pretended he didn't know who David Duke was. 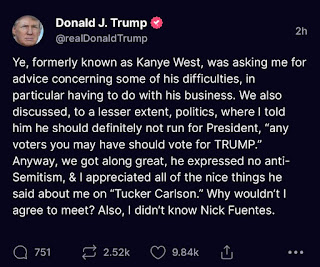 Hint for Trump (who was allegedly "taken with" the young man's enthusiasm--he was one of the "very fine people" alleged to be at Charlotteville.

Some people are aghast--the Groyper King? At the Once and Possibly Future Winter White House? Fuentes is a guy who thinks Charlie Kirk and Turning Point are RINOS. Who's vetting who shows up at Mar-A-Lago? Even Charlie Kirk can get Fuentes booted from places where he doesn't want him. Ben Shapiro can look past that fucker and not put up with his anti-Semitism.

But Trump can't say no. A man who was president, is running for president, and who did have multiple boxes of top secret stuff stashed in that very hotel. May still be holding some shit back, for all we know.

Trump can't say no to Nick Fuentes. I mean really? Could he? Wouldn't that be "cancel culture"? And can you fathom the absurdity of Kanye West asking Donald Trump if he would be his running mate? The spectacle of two men darting their delusions of grandeur at one another. Yet, Trump has to impress. He can't say "No" to crazy Ye--a celebrity. He can't say no to the white supremacists, the neo-Nazis. They vote, after all.

He's just a manchild who can't say no. He's in a turrible fix.

There are conservatives who are still madly butthurt about Hillary Clinton calling some portion of them "deplorables".  Marjorine Tater Grease just recently thought aloud that they were owed an apology. Like hell they are, and this instant is the exact demonstration of what "deplorable" means. It means straddling the line between knowing Nazis are bad optics* and still wanting Nazi friends. It's when you are in a place where Milo Yiannopoulis (Ye's campaign advisor) takes shots at you and he's an apologist for pedophilia (well, so is Mike Huckabee, but whev).  This little dinner suggests what deplorable means.

Trump still is one with the deplorables, but for Republicans who don't like the taste Trump is leaving in their mouths right now, removing oneself from supporting him is still and always was an option.

*UPDATE: I feel sleazy about referring to the "optics" because morally, if you willingly dine with Nazis, what does that make you, whether you do it publicly or privately? But "very serious right wing people" (hmpf!) already doubtless know perfectly well what Trump is, and will bemoan only that he is not more circumspect.