Once Again, Not One Republican 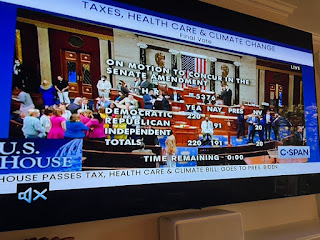 Given the opportunity to participate in delivering an economic package that invests in preserving our climate, keeping health care costs affordable, ameliorating inflation and reducing the deficit, the House Republicans chose to say "Thanks, but no thanks."

Here's what that means: they would have been in favor of higher insurance premiums. They would have been in favor of higher drug costs, especially for seniors. I've already explained what Senate Republicans shamefully did regarding failure to assist millions of Americans reliant on insulin to live.  The GOP preferred to lie about this bill over supporting a reduction in the deficit--that means they just aren't fiscally responsible. They don't care that this bill curbs inflation--they would rather we had runaway inflation, if it only meant they had a better electoral position.

That's an astonishing disgrace, isn't it?  Depending upon what party is in power, you can't hardly rely on Republicans to ever do the right thing, they will just do the politically convenient thing. Take a look at  their old president, who they still support in rigid lockstep, as if unable to entertain what anyone with critical intelligence and a functioning ability to connect the dots would have realized--he's just not any good.

They are a benighted and useless party, an infected appendix of the body politic. They need to be voted out before they become septic.  All the more reason for anyone who cares about the future to vote Democratic.

R's have zero interest in actually improving the lives of anyone except large donors.

I've noticed they do their very best to pretend that tax hikes on the rich are the exact same thing as a tax on middle class folks and try to pretend the IRS increasing employment is about persecuting the middle class, when the big idea is having the resources to properly go after the wealthy. Same thing as the Trump line that somehow, serving a warrant on Trump is the exact same thing as regular Trump supporters being "raided" for no reason at all. They want regular people to ignore their own situation in sympathy for people who really don't deserve it.