Giving Trump a Good Thinking Over-- 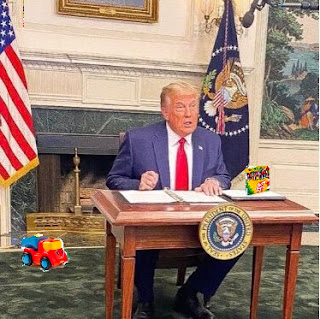 I don't think it's even rare that Americans of no small patriotism and no short memory have some episode of shudder or start at some random interval of their day and think to themselves--"Donald Trump had access to the nuclear codes!" and it seems like a bad dream, the kind of paralytic nightmare where a weight as thick as a body lays across you as you struggle to awaken, but it is broad daylight, the night terror has been out of office for well over a year, and some part of you wants to believe that Freddy's son is politically dead. He was impeached twice. He was a one-term wonder. The scary clown won't come back and eat you.

And then some dumb muppet in Ohio auto-Darwinates by picking a fight with the FBI for the honor of defending a pussy-grabbing silver spoon narcissist who used his charisma and talent for spectacular lying to drive a crowbar in the center of our national fault-line. All because the FBI executed a warrant on Trump, and that was supposedly not "OK".

The idea that Trump can actually do wrong may be foreign to some people (not me, hell no!) but given that supposedly responsible and sober-minded elected GOP officials are also giving the twice-impeached and one-termed Trump some cover seems really ill-advised. Because what if all outwards signs are actually true, and he ultimately does turn out to be, as he as time and time again proved himself, a no-account dead albatross affixed to an anchor?

I mean, this is just a thought experiment here, but what if, after suspected Russia/Wikileaks collusion, and the Trump Tower meeting with Gospozha Veselnitskaya, and the whole deal with Mike Flynn, and the Comey firing and the Oval Office Meeting with Lavrov with only Russian press in attendance and Helsinki and all this--it turned out that Trump never actually had any intention of putting America first, but only himself? After two impeachments. Both related to the attempt to secure a second term by filthy tactics.

What if Republicans shouldn't be so quick to take him into the protection of their healing media circle until they fathom the whole story? (FOR ONCE!) and appreciate he took highly sensitive documents that includes sensitive nuclear shit and top secret shit no sensible human would store in their unpadlocked basement at a glorified country club, and then think ok a padlock is great, let's ignore subpoenas, now.

Because this is what Trump seems to have done. He decided to just hold nuclear-related stuff in his basement like it was no big. Maybe he showed it off to some real interested parties, Maybe he had plans to share this information with his and Jared Kushner's very good friends in the Middle East. Maybe he just has a gross fascination with nukes and also once wanted to try to bust a hurricane with one.

Republicans straightaway and reflexively circled the wagons around Trump at the first sign of danger, as conditioned as CBT laboratory pigeons. What if he wasn't worth it, and the real story would taint all of his supporters with the worst of all possible brushes--what if treason?

But if one stayed around after Mueller and the insurrection, I guess you have reconciled yourself to TrumpWorld, and are no longer Team USA.

That would be a pity. I think current events should inspire more people to reconsider how they see Trump. And appreciate for once that he can only do harm.