He wept sitting on the bench

He wept sitting on the floor

He tallied days on a chalkboard set up for the purpise pic.twitter.com/dgGag1Qcjn

Oh, look!, It's the Walkaway stool pigeon Brandon Straka, who gave considerable help to the DOJ and is now doing performance art.  Also too, we can see the dear motherly comforter Marjorie Taylor Greene. She should have anointed his feet with spikenard and rubbed it in with her double-processed hair while she was at it. 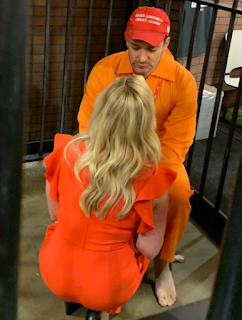 If anyone thought the Viktor Orban shit was going to be the principal shame of CPAC 2022.2: Fascism Boogaloo (no, actually....) Why no! It's the attempt to recycle the insurrectionists into martyrs (yeah, they love martyrs, these guys) and blame the FBI and DOJ and the 1/6 Committee for thinking a whole violent episode to try and overthrow the government is something worth prosecuting. (Rep. Andy Biggs suggested defunding the DOJ which is definitely "Defund the police" if I ever heard it.)
Every conservative who faces any kind of accountability is automatically a victim. Alex Jones is supposedly a victim. Trump is a victim. Everyone at CPAC is unfathomably stricken and can barely stand all their various oppressions.
Rick Scott thinks the liberals are the real book burners. They aren't actually burning any books, while neo-Nazis are closing libraries, but whatever. Ted Cruz explores kiss my ass's gender as being outside of the binary by proclaiming kiss my ass's neo-pronouns as "kiss my ass". Kiss my ass has decided that "kiss my ass" better describes the entire vibe of kiss my ass's gender expression, which is neither male nor female but definitely has a whole lot to do with ass. (All across this land, English teachers are weeping because the previously understood definition of pronoun, it is no more.)  Matt Schlapp is also Team Fuxxor the Binary, considering USAself to be USA/USA's. I'll try to honor that.
USA's partner, Mercy, has shown her quality to be strained. This whole event is a showcase of grievance, racism, and grifting.  And for what it's worth, if you thought you saw Nick Fuentes there, CPAC says you did not.  (Just like TPUSA, one never admits groping with groypers.)
I will refrain from asking where is a ginormous meteor or sudden sinkhole when our idiot culture deserves one but look at these sideshow geeks. Just take them all in, in all their pugnacious and howling glory. Or at any rate, their salacious and growling gloryholes, where they pleasure their political id as if we can't see what they are up to.
They are talking up their 1/6 antics etc. to themselves.  From the outside, how weird and cultish that seems! We should never fail to deride these bitter pitiful people. And never let them arise from their mental cells to strike out at our democracy like they did on 1/6 again.
at August 06, 2022

The best thing about this is the guy in the cage is Brandon Straka the walk away conservative grifter who gave up lots of information on other Jan 6th rioters in order to escape a harsher sentence.

On one level, this performative sheep-dip passion play looks like it's supposed to absolve the 1/6 "martyrs", but in reality, I think the intention is to ensure loyalty and ensure that shit (fall-out from the legal flowback) continues to flow down-hill, not roll up. Straka is at a level of the grift where he feels protected, ditto Greene. They have the patsies they want to sell out, and then people who stay protected. Same situation as the mob during a federal shakedown, some process used in protecting the real machers in Iran-Contra. They have a system.