Former Trump campaign strategic adviser Boris Epshteyn to @AriMelber: "Yes, I was part of the process to make sure there were alternate electors."https://t.co/v06GFV4vpO

It's kind of funny, that, on one hand, we're hearing about secret meetings that happened in the White House with Mark Meadows and other conspirators to overturn the 2020 elections, and we've seen Trump fight releasing White House docs to the January 6th Committee all the way to the Supreme Court (and lost, 8-1, about which, hmmm), but on the other hand, I can't even bat an eyelash about Boris Epshteyn admitting to the alternate elector scheme and describing Rudy Giuliani as having spearheaded it because, well--yes. Obviously?
It actually is pretty shocking to see the actual draft of an EO to seize the voting machines and appoint a special counsel. But there was already solid reporting that Flynn and Powell proposed exactly this (with a strong likelihood that Powell is the author and proposed special counsel pick) and the thing is, they also said that's exactly what they wanted to anyone who would listen.
It's sort of like when mail boxes and sorting machines were being stowed back before the election--you could see what they were doing. Trump both decried voter fraud (since 2016!) and actually encouraged Republicans to do it (they apparently heard him in The Villages).  It's overt and intended to shock you into compliance with it. Because in the mind of the Trumpists, nothing they do can be wrong, whether it's the extortion of world leaders or election officials.
They would have a soft coup over basically an uploading error in Antrim Co. for "national security" making American great. But they wouldn't mind thug tactics and head cracking from RW militias along the way. It's a sick joke.
I am nearly past laughing, though.  Except for gallows humor. 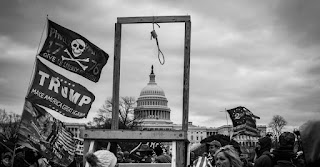 I have spent most of my working life building things. Every time I see images of this "gallows" I am amused and amazed by the inept construction. These morans can't even read a tape measure.

I too have built a lot of stuff and yeah, you're right: inept is an understatement. Would've done the trick never-the-less.