Frigging in the Rigging 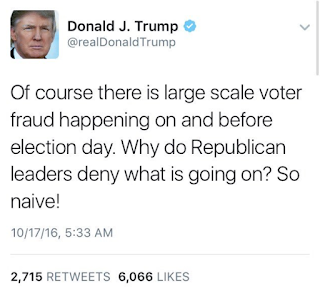 There's so much actual stupid in this one Tweet regarding whether voter fraud is an actual thing that I struggle to know where to start--of course Republicans are admitting there is humungous voter fraud--take a look at all the voter ID laws and so forth they have put in place over lo! so many years! The GOP has been willing to smite all kinds of voters off the books to strain at gnats, basically. There really isn't this voter fraud of which Trump speaks--in fact, the illusion that there ever was was really a big old GOP whoop-de-do. This is not how voting works.  It doesn't matter what spokesghoul Rudy Giuliani, who decries the problems of voting in the inner cities whilst having been a Mayor of NYC elected twice (so suburban, NYC, what?) and thinks dead people are doing so much of the voting, says.   He, like Trump, should know better (and Giuliani probably does--Trump, not so much).

All elections are run on the state level. There is no overriding national vote frigging rigging. The elections have bipartisan oversight, and state government comes in both flavors: Republican and Democrat. It's just appallingly untrue for Trump to speculate about, and his saying it seems like a balm for his poll-wounded ego more than anything else.
Posted by Vixen Strangely at 11:57 PM

After President Obama was elected, states like my home state of Texas launched massive searches for examples of voter fraud to justify their attempts to limit the vote.

After spending many millions, a couple states found a couple examples. Most involved things like people filling out absentee ballots for their elderly mother.

Mr. Trump would be better off warning us that we're all going to be struck by lightning if Clinton wins.

You are quite right--note that part of the RW "voter fraud" paranoia actually involved the mere registration of lower-income people of color through the now-defunct organization--ACORN. There isn't a problem with voter fraud, so much as a discovery that diverse people will vote according to their needs--and the GOP doesn't benefit from a full diverse voting complement participating in the franchise.

That this lead to mass disenfranchisement isn't all that surprising, though--Choicepoint did the same in Florida and TX and other places in 2000 http://www.salon.com/2000/12/04/voter_file/. The US has long been
slippery about the idea of democracy and who it entails.