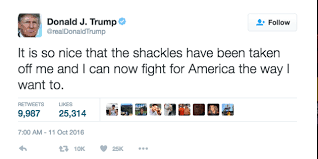 What, pray tell, took off the shackles of Donald Trump, anyway? Because he said this alarming thing on October 11, I would suppose this was a reaction to a combination of awfulness that hit him in succession: the 2005 "grab'em in the pussy" tape release, the not nearly what he needed debate performance, and then, the night of the long memories, when it turned out that some of the attention that he paid to people in his orbit was not appreciated at all. It seems like his first line of offense would be to cow the establishment GOP, who aren't supporting him the hell enough (as if they don't have their own electoral battles to think about. (Who even knew he felt shackled at all? He's basically had the least reigning-in by GOP leadership--they don't lecture, they roll their eyes and whistle, near as I can tell.)

But now that he's being hit by several accusations regarding his general sleaziness, he wants to lash out in a funny old narrative-killing way. See, he gathered about himself the accusers of Bill Clinton for sex-related misdoings and that one person from a case Mrs. Clinton had so many years ago, alleging that women need to be believed and that the very worst thing that could be done is to slander and insult them and make their lives more difficult--

So how does he confront the perfectly reasonable allegations of women, many of whom can be proven to have been associated with him, some having leveled complaints a good while before the last weeks of the presidential campaign--but were uniquely empowered by the words out of Trump's own mouth that he did "grab'em by the pussy"? He insults them and accuses them of being part of an international conspiracy involving bankers, the media, and a Mexican billionaire.  He alleges these women were never hot enough for him to assault them anyway--as if there is some degree of hotness at which--oh boy! he so would?

Now, I'm being a little charitable here. Hillary Clinton faced the slings and arrows of outrageous media misfortune for years before she reached for a "Vast Right Wing Conspiracy", and the truth be told, you could straight up follow that money regarding the Scaifes and sundry others in funding a local takedown--
But the weird-assedness of Trump is to think it's he who is the victim of anything other than his own mouth. The lawyers of the NYT made such a beautiful letter--I will show this to you: 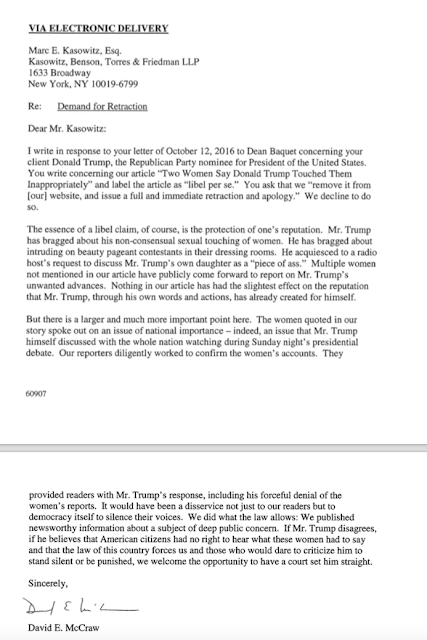 Shorter NYT lawyer: "You went and shit the bed and now you want to blame the sheets for the smell? GTFO." David McCraw, you are a hero of brevity and smack downs. Mille Grazie, counselor. He was caught on tape saying he kissed women and touched their privates without waiting on consent--he's busted.

That should be that. But know he wants to defend himself against the allegations he would have seen coming, if he had maybe allowed himself to be vetted like a grown-up candidate instead of not letting his advisors wade through his truth trail because it might make them feel sad things.  :) So he reached for a surefire all-purpose mad-debunkatorium to aim at your sensorium:

Anthony Gilberthorpe, who appears to be Britain's most lying man of any kind, ever. Why not? Trump doesn't really care if you think he did or didn't cop feels and make pussy his deal. He wants you to think women love him because he so charming and generous and so great to the mistresses that might even become his wife--ish. Because he thinks he is a nice guy (TM) who courteously compliments lady-persons by stating the degree to which he finds them doable, or insults them by expressing the degree to which they are not doable. He basically thinks women are satellites of the extraordinary gravitational pull of his penis. And if he gets it close enough?

His unshackled id is all sexism. It's core, it's tendrils, it's everything--sexist.

To Donald: Darling Orange--you are going to think yourself a victim, but you are the victim of your own mouth and your own actions over more years than I have even been alive . Carlos Slim didn't make you a sleazeball. Hillary Clinton didn't make you a sleazeball. You didn't say things on tv and on radio to Howard Stern because he and Robin coaxed you to be a sleazeball--embrace it. You are made of sleaze, and at the right temperature, you are going to burn up and get smoked because this is the nature of sleazeballhood.

Some people who have experienced sexual harassment and assault might be triggered by what Trump's accusers have revealed--but I think it will be made up by seeing him lose so bigly.  He has responded to being accused of doing what he bragged about so poorly, you can see why failure to self-vet is a big bad thing to not do.

Posted by Vixen Strangely at 1:45 AM