Keeping Up With Trump is Exhausting 2 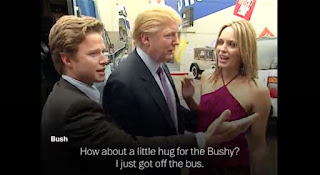 So, the story that Donald Trump would stroll into  the dressing area where half or even wholly naked beauty contestants were changing turned from moderately gross, to mind-blowingly weird when it turns out he also took this kind of stroll into the dressing area of the Miss Teen USA contestants, who were as young as 15.  This would be underage, but very attractive girls. I think the line from the Buzzfeed story that kind of kills me is that one of the young ladies recalls talking about this with Ivanka Trump, who allegedly said, "Yeah, he does that." This is the Ivanka who saw her mother thrown over for a younger wife, and who asked her father not to date anyone younger than herself. Like this young lady already knew her dad was kind of weird about young females.

It got worse though, and at a pace that I should be used to by now. A clip came out that revealed Trump making an inappropriate comment about very young girls--that in ten years, he'd be dating them. But that's just talk, right? That kind of locker room banter that led him to describe, unbidden, his forcing himself on women without their consent, or his comment that it doesn't matter what the media writes, so long as one has "a young and beautiful piece of ass." But then it came out that there were two accusers who said that Trump did force himself on them (in the same way he did Jill Harth).  And then another, a former beauty queen, who also alleged other inappropriate pageant-related sexism. And then an accuser who alleges she was attacked at Mar-A-Lago.  Then, a People reporter admitted this happened to her too, in a harrowing, personal story. And a court date was set regarding rape accusations against Trump regarding an assault on an underage girl.

It's hard to know what to make of so many allegations coming about so swiftly--maybe all this attention to who Trump is finally told the women who had stories that they were not alone, and maybe now they would be believed. Some might suppose that this was engineered to derail Trump's campaign--I have a hard time with this rationale, though.

Coming forward with this sort of thing in your own name and with the political environment being what it is has a lot of risks. Reporters have certainly related that they have gotten some nasty and even downright threatening emails and phone calls regarding their coverage of Donald Trump from his followers, and I can't help but think that his accusers may bear a similar risk--but here they are choosing to take it even though Trump has tried to insist he is not what his own words have said he is, and tried to cover himself by deflecting with the allegations against former president Clinton.  I don't know how long that can work for him--especially if he tries to lash out at the outlets who broke these stories with lawsuits. That might put him under oath, and extract some information that would paint himself in a light he would not want.

It's a damn shame we can't have an issues-driven election, where both sides were concerned with the policies that would improve life for millions of Americans. But the primaries decided otherwise, and here we are. With one of the most capable and experienced politicians to run, and with a seedy egomaniacal "playboy billionaire" whose baggage just caught up with the train. And while he has defenders, they don't sound so good.  Not to these ears, anyway.