Senator Sessions Is Not Sure 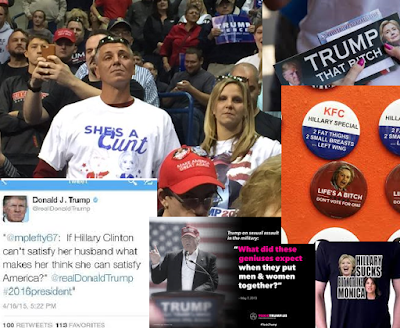 I've pointed out the misogyny of the Trump campaign with respects to Secretary Clinton before, but I think it's helpful to note that there is a strain of misogyny in general (I mean, take Mike Pence, please!) that reveals itself in subtle and not so subtle ways. But this isn't peculiar to the Trump campaign at all--look, things like trying to redefine rape to only refer to forcible rape, or rejecting any kind of enforceable equal pay bill, have been mainstream Republican thought for awhile.

It's just that, as with the Trump Effect in terms of bullying, Islamophobia and racism, it's likely that the way Trump off-handedly talks about grabbing women "by the pussy" will be simply assumed to be ordinary. Take that nice family man in the picture above with his very special "She's a cunt, Vote Trump" shirt. He's wearing that and I'm sure he doesn't care who sees it. People have brought their children to this rally, and he thinks it is fine and dandy for the word "cunt" to be splashed out before the eyes of young people. This is another word for "pussy". These are somewhat vulgar slang terms for female genitalia. He is there to support a candidate for president who has suggested that it is ok, if one is rich and famous, to grab women by just this body part. Just reach out and touch someone. Maybe because you are moving in on them "like a bitch". And want to fuck them, even though they are married people?

Is that what he's raising his kids to think? That it's ok for his sons to be "pussy-grabbers", use the word "cunt" out loud in public, and be carefree fucking about? That it's ok for his daughters to have their pussies grabbed (probably by their employers, and if they don't like it, they can change jobs) and possibly be called "cunts"? (You'd hope not. But that isn't what he's wearing on his shirt, is it?)

But why should I rag on this anonymous John Q. Citizen and his profound lack of taste, when I can talk about the honorable gentleman from Alabama, Senator Jeff Sessions? Who simply does not know if he would characterize grabbing someone in the pussy as being a sexual assault. Why, whatever do the laws on the book say? Oh me, oh my, how do we ever sort out whether grabbing a person by the crotch without their consent is wrong?

Am I supposed to entertain the notion that, were an individual to aim their mitts at the crotch of any of the persons of female identity within Senator Sessions' household, he would not actually know whether he was honor bound to sock the blighter in his miscreant face? It seems to me that if put to the real-world test, he would consider it cowardly if he didn't throw down on a molester--but maybe he's confused about whether women are just public sex toys that sometimes do housework and answer the phone. I certainly hope he doesn't think the latter, and as culturally one is taught to respect women, he would assist any human being who was getting rough and unwanted handling--because that's just the decent thing to do! But when confronted with the choice in the hypothetical "Does this answer hurt my candidate?" sense--really? Suddenly because vocally molestation-positive Trump is at the top of the ticket, Sessions doesn't know whether crotch-grabs are ok?

This is Trump's "leadership" in action. His example is "go low".  And he takes people down with him.

EDIT: No, really. This is an open question for conservatives now. Is it ok to grope people? Who knows?
Posted by Vixen Strangely at 1:14 AM

Republicans are going to have one hell of a hangover after the election.

All those family values folks are going to be asking, "I defended WHAT last month?"

Naturally Vixen, it's quite possible that Republicans will lose. (Republicans are Bill Kristol, Jonah Goldberg, Paul Ryan and others.)

My view is that everyone should be drawing up 2 contingency plans depending on who wins the election. I have one plan if Clinton wins and another plan if Trump wins.

A good sailor knows how to adjust the sail depending on which way the wind blows. Naturally we all have our preferences, but ultimately we will all have to try to thrive in whatever contingency presents itself.

It's Sessions who said that.

And, after career of active and open bigotry, he still found a way to go lower!

Why would anyone be surprised?