That Debate Could Have Been Worse 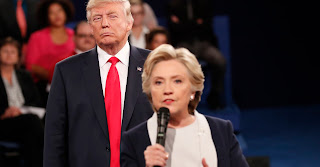 After the weekend Trump Campaign set-back due to the airing of Trump's immature and pervy attitudes towards women, I was in cringe-mode over what fresh horror the actual debate would bring us. Trump seems to respond to challenges by slugging, and made an interesting mind game move of having a public sit down with former President Bill Clinton's accusers re: sexual misconduct, as well as a victim of an assault whose perpetrator was defended by then-attorney Hillary Clinton. (I won't go so far as some commenters regarding Bill Clinton's accusers, except to say that in light of what Trump has revealed himself to be, to move to support him politically with their stories leaves a certain impression in my mind.) Was he trying to set up shop in Hillary Clinton's head? Was this payback for the Alicia Machado lousy week he had? (Which was his own damn dumb fault for not being able to leave anything alone.) Who knows?

And yet, this debate was barely a hair more cringe-inciting than the first debate. Trump might have seemed more prepared--to an extent, but the stakes were considerably higher for him this time. There was a definite needs of fact-checking--which Clinton helpfully directed people to her website to in order to get what skeptics would probably not consider unbiased Trump debunkage.

But there were definitely some awkward moments--take the picture above. The freewheeling standing and walking about the stage to face the audience townhall-atmosphere gave both debaters the opportunity to move around and seem looser--unchained from their podia, so to speak. But Trump sometimes gave the impression of shadowing Ms. Clinton, like he was skulking up behind her. That was a little weird. Trump repeated his lie, already called out in the first debate, that he opposed the Iraq invasion originally, and made the also long-debunked accusation that the 2008 Clinton campaign started birtherism. He really disappointed in any answer that had to do with Syria. I noted regarding the VP debate that Pence is more of a Russian realist and doesn't quite share Trump's foreign policy outlook--Trump basically was like "I don't talk to that guy." His running mate. Whose debate success he wanted to take credit for. Ok. That's not really awkward. (Yes it is!) And he made a point of trying to intimidate Clinton over the mostly moribund email scandal, by saying if he became president, he would get her locked up. Which sounds like just prosecuting one's political enemies in a banana republic kind of way. Ew.

Also, for some reason he insisted Assad and Russia were targeting ISIS (not really, when this is a thing the US is totally doing. Not those guys. Us.) And when he was asked about the humanitarian efforts in Aleppo, for some reason he shifted gears to Mosul? (Well, when asked about how he'd reassure a Muslim-American about Islamophobia, he basically gave an Islamophobic answer, and still, despite push-back, doesn't seem to realize that not all Black people are living in some kind of inner city hell--so maybe we can only expect so much. With one month left to go before the election.)

He's not really fit to be president. But he avoided some kind of lurid psychotic break on the stage, and that was awfully basic and functional of him. Let's see how many pundits call this a draw.

EDIT: By the way--Trump was still snorting like a mad bull. What is that?

Posted by Vixen Strangely at 12:08 AM

He brought up virtually every conspiracy theory about the Clintons ever - well, other than the murders, but I suppose he has to save something for the third debate.

I'm not a fan of Secretary Clinton and have been mulling whether to vote Stein, Clinton, or skip the race entirely. Still, I see no way that anyone watching that debate could not believe that Clinton won it hands-down.

I'm surprised that Clinton chose to go with the 10 year old tape that suggested Trump improprieties. It virtually opened the door to a discussion of the Clintons' sexual history.

Nothin' for nothin' but I was an adult and lived through the Clinton era, and I can assure you that most of that stuff is on the level. Everyone was glued to the TV set around the country when Bill Clinton was impeached, and all the salacious information about Lewinsky and the blue dress was publicized.

All of these matters were widely discussed in those days, and as a consequence it seems like a bad tactic to intentionally kick off a discussion about sexual abuse. In the first debate, Trump conspicuously stayed away from the subject. So I cannot understand why Hillary decided to open the door.

I'm surprised that Trump went with 20+ year old tat that didn't even make Kenneth Starr crank the calliope over. I was an adult and lived through the Clinton era too: old enough to vote for Clinton in '92, and a hair older than Monica Lewinsky. Some--mark that--some stuff is on the level. Trump "stayed away" from the Clinton sex stuff in the first debate like he wanted a "nonparticipation prize" for it. Like he coulda shoulda woulda, and a nod is as good as a wink to a blind man--as the Monty Python skit had it. The Machado stuff was one thing--maybe coordinated with Team Hillz. The Billy Bush tape dropped independently and suddenly Trump couldn't even find the high road.

So which thing was Hillary "opening the door" with? Because if pointing out that Trump is sexist opens the door to his pretending she tried to ruin people who were Clenis-adjacent

It doesn't seem like she ever went out of her way. Maybe she was opening the door on Trump's sexism because his and his running mate's policies aren't great for women--they really aren't, and that is a real, not gossip-based, policy concern for me, as a female.

Trump has his own sexual accuser can of worms, but deep down--I'm completely comfortable about just looking at and discussing his actual policies. Equal pay? Child care? Recognition of sexual harassment as a real actionable workplace grievance? Ageism, disablism, and lookism. Is he down with women living up to our potential, or is this just some bullshit that only pertains to pretty privileged girls like Ivanka and well, maybe, if she acts right, Tiff. As in--cancel that order of social justice from Team Trump, I think it's poisoned.

Hi Vixen, you know, I think I agree with you up to a point

I am distressed by the fact that our political system races to the bottom, entirely ignoring the propositions each candidate wishes to advance. Quickly everyone is turned into a frothing mass of mob mentality. And the idea is to try and prove each candidates is a complete moral degenerate. This is reductionism plain and simple, and the salient fact conspicuous by it absence is any discussion relative to the propositions candidates have presented to help the country.

My view is, had Clinton held back on the Trump tape, she might have allowed Trump to bring up the salacious points first, and then she could have said, “Well, this is typical Trump, trying to drag our political process into the gutter.” As it was, Trump appeared to be responding because of charges launched at him.

For the record, at the moment I think Hillary is a little ahead, but we simply won't know until after the election.