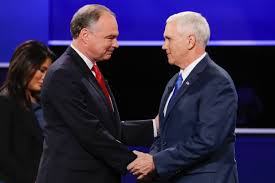 I'm skeptical of the value of vice-presidential debates because I think the real decision-making for the voters has to do with the top of the ticket, and people just don't pay as much attention to what the running mates have to say. Some people hold that a VP candidate like Sarah Palin could be a "game changer" (as in she sunk Senator McCain's chances in 2008), but I disagree--Senator McCain's campaign got Governor Palin as a running mate because of where the campaign already was and sensed it "needed". It is great when a VP pick seems to have additive value, as Senator Biden was for President Obama, but the best one can hope for is a complement--a fit that "does no harm."
With that in mind, I viewed the debaters at this evening's event not so much on the basis of what they themselves had to say, but how well they spoke for their ticket. Stylistically, I think Senator Kaine did himself a bit of a disservice by interrupting more frequently, but understand why he kept jumping in. Although Governor Pence was more composed, he seemed to need some real-time fact-checking from Kaine, and also, I understand that as a tactic, Kaine was attempting to bait Pence into defending some of the shocking things his ticket-mate has said.
Which he didn't actually do--and this might be a problem. Although Pence tried the "I'm rubber, you're glue" method of claiming that it is the Clinton Campaign that is actually insult-driven, the uncomfortable reality that Donald Trump actually does insult people all the time is not actually deniable. There's record of him doing it--it's practically the basis of his campaign. I thought Pence gave good answers regarding foreign policy (he seems to be more of a Russian realist than Trump, and his answers were more coherent than things Trump says)--but he seems to be in denial about the actual positions Trump holds. Maintaining that Trump didn't advocate nuclear proliferation when he certainly did is just negligent. And I think fact-checking Pence for the next few days might be quite a useful enterprise.
In the meanwhile, even if Kaine's interruptions seemed superficially annoying, he managed to drop a lot of insinuations about Trump's record based on the things we do know from months of journalistic investigation--and that could resonate, provided regular people actually pay attention to these things. And I admit being skeptical about that.
I didn't enjoy this debate very much. When the candidates did stay on topic, I think Kaine did a pretty good job of laying out Clinton's policy proposals, but too much of the debate was argumentative back-and-forth and I think both candidates went off-topic regarding the questions posed. I don't think there was much there that would sway any decided voter, and I think I'm even more agnostic about undecideds (who are these people?).
EDIT: The Clinton Campaign feels like it was solid, though:

Lucky to have a partner like @TimKaine who stood up for our shared vision tonight—instead of trying to deny it. #VPDebate

Posted by Vixen Strangely at 11:58 PM