Was the Trump Foundation Used Like a Trump Campaign Kickstarter? 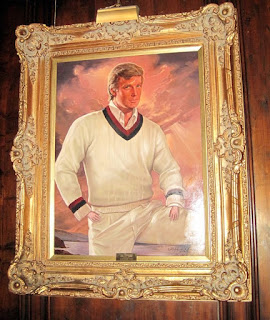 One of the interesting things that was discussed at the VP debate was a comparison of the Clinton Foundation and the Trump Foundation. Mike Pence wanted to make an issue of the money from assorted bad actor nations that might have flowed into the Foundation, but I always silently add "which was used to buy medication for children with AIDS" every single time I hear it, because it's basically the sort of work the Clinton Foundation does, and they use more than Pence's quoted 10 cents on the dollar to do their charitable work, and they don't personally benefit from it except in that "warm glow of altruism" kind of way.

The Trump Foundation story is a little less clear-cut. Senator Kaine got his dig in about the Foundation buying Trump portraits--which is a true thing! He also used it for other assorted personal business--apparently. He hasn't himself donated to his Foundation in some time (since 2008). (The Clintons donate to their own Foundation, of course. They give away about 9% or so, just about tithing rate. They might have more liquid funds than Trump does, though.) But what is downright amusing is the possibility that the selective giving of the Trump Foundation within recent years might have helped lay the "foundation" (ha?) of his current presidential campaign. Because that is really not ethical.

I mean, we could seriously ask why do evangelicals like Trump and come up with answers like "Well, authoritarianism" and "Loving the redeemed prodigal". But his offering wads to Family Leader and Billy Graham and all, might also be pretty persuasive. I've looked over the 990's for the Trump Foundation (you can too!) and make your own mind up. I notice there are quite benign and hardly political donations there, too--like the Police Athletic League and the Drumthwacket Foundation (that's the New Jersey Gubernatorial manse historical preservation outfit). There's a lot of stuff like the National Inclusion Project and the Michael J. Fox Foundation that I'm pretty much in favor of, too. But there is an open question whether some of the activities of Trump's foundation are explicit self-dealing--in a way altogether different from the bogus insinuations lodged about the Clinton charity.

I feel like there's a false equivalence afoot when these things are mentioned in the same breath.
Posted by Vixen Strangely at 12:51 AM