Eating KFC on a Plane, As One Does 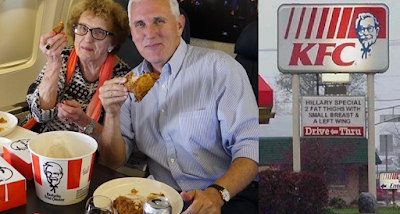 When Donald Trump Tweeted a picture of himself eating KFC on his private plane, the fact that he was eating it with a knife and fork pretty much became the joke. Was he trying in some weird way to be one of the common folk with his fast food fare? In the picture above, Gov. Mike Pence demonstrates the way us common working bastids do it--with your fingers. Thus, the finger-licking goodness. But Ha! I have appended a meme--yeah, there a gross misogynist Hillary Clinton joke available on hats, stickers, tee shirts, in several variations, basically describing her as chicken parts: two fat thighs small breast, and a left wing. Hur hur hur.

Are Mike Pence and Donald Trump telegraphing this stupid thing as an in-joke? Christ, I just don't know. But what I do know is, that level of sexist crap (along with racist crap and conspiracy theory crap) seems pretty welcome among the people who are working on this campaign, based on an investigation of their social media.

Now that probably isn't that surprising for people surrounding anti-PC Trump. I mean, his honorary co-chair in NY, Carl Paladino, has gotten flack for that sort of thing in the past regarding his emails of a sexist and racist nature. Kellyanne Conway, the current babysitter campaign manager has a history of making some pretty special comments: 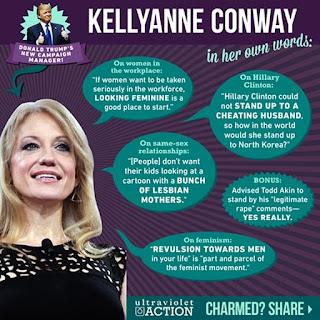 And she's going to be the one who tries to clean up The Donald? Yeah. Ok. (And Steve Bannon isn't going to be any help on the messaging front either.)

With this level of message discipline and professionalism on display, can we be shocked that in one CO county, the Trump HQ office is being run by a 12-year old? I mean, what harm can a kid do, well there were threatening calls to some delegates during the primaries, but you know.... kids will be kids. (You guys, if my mom was the official field coordinator and she caught me doing that, I would be so grounded from campaign stuff, seriously!) He should have made his threats like Carl Paladino, alleged adult....by email. No one ever looks into those.

So do I really think Mike Pence and his momma are eating KFC like "take that, you pear-shaped liberal hag"? I have no way of determining whether anything this campaign does is ever unintentionally gross. I'm getting to where I assume grossness. (Although I don't want to think Mike Pence's momma is in on the joke.)

This is a disgusting campaign, and I hate looking at it. No one wants to toast marshmallows over a tire fire.

Posted by Vixen Strangely at 11:31 PM