There's Something Wrong With Rudy Giuliani 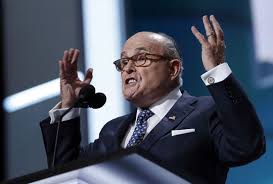 I don't think former NYC Mayor Rudy Giuliani has been looking very good lately. It's just this thing, you know? He has a history with poor health that might be affecting him...

Yeah, I'm not going to continue with that--he's a cancer survivor, and I am respectful of his journey with that. It's just that this is probably the reason I think that what he's doing regarding spreading the long-simmering conspiracy theory that there's something wrong with Hillary Clinton is really gross and wrong. There's recent evidence that there isn't any damn thing wrong with Hillary Clinton's mental acuity.  She just won the Democratic primary against a pretty popular challenger, for crying out loud. But Giuliani wants to make a claim citing internet rumors?

It's disgracefully low of him, isn't it? I'm not saying that we should expect better of him. But I do think that this particular line of attack on Clinton might be signaling that Donald Trump has no intention of debating Clinton. Not any. Because why in the hell would you telegraph that your opponent is soft in the head going into a debate where she is likely to clean his clock like her shingle read "Clinton's Clock Cleaning"?

No. No, that doesn't seem especially likely to me. Which makes Team Trump not just liars, but cowards or...lacking the foresight you might expect anyone with a functioning forebrain to have.

Posted by Vixen Strangely at 7:12 AM