Frigging in the Rigging 2 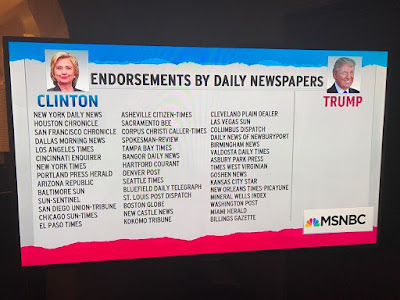 It would be a lie to say that there are actually no daily newspapers that have endorsed Donald Trump for president--to date, there are two. But these papers stand as rare islands in what looks like a sea of Clinton endorsements, from papers that have seldom or never endorsed a Democrat before, or even publications that generally have no political bent whatsoever--like Vogue (?!) or who very seldom make presidential endorsements except at what their editorial staff deem to be an historic juncture.

It's no wonder, then, that Trump has been softening up the media all this time--look at them! In the tank for Hillary Clinton! in part blaming the media for the rigging of the election. His rhetoric has become so negative regarding the press that reporters at Trump rallies fear for their safety. (I don't think any of this bodes well for the First Amendment under a possible Trump presidency--could anyone?)

But "the media" is not some cozy monolith that can just lockstep into a conspiracy to get a given candidate elected. There was no bias for Clinton or against Trump displayed in the primaries in terms of media coverage (the opposite seems to have been the case). I hate to be the bearer of the fucking obvious, but when you read something like this that indicates that there is more "negative coverage" of a certain candidate (Trump)--it might just be because that candidate has generated more negative coverage by stupid things that he or she has actually done or said.  As in, Donald Trump has interesting stories about himself that he calls attention to and drags out in the media because that is who he is. And frankly--the email stories about Clinton are basically Yawn City at this point. That's not an indication of bias. It's what's current and what the audience might find interesting (yes, Virginia, there is a ratings clause). Trying to create balance where it does not exist would be, well, false.

So when Hillary Clinton gets endorsements from assorted GOP officials past and present, retired military figures, GOP national security experts, and Nobel Laureates in Science,  it might actually serve us to look at whether these endorsers are seeing a qualitative difference between the candidates. Numerous figures have pointed out that Hillary Clinton is simply the most qualified, by virtue of experience, candidate to have run for this office, while Donald Trump's ace card is his "outsider cred". As in--he has little relevant experience for the job at all. And he seems, to many observers, to be a petulant credulous man-baby with boundary issues, a fetish for self-aggrandizement, and an inability to admit he is wrong about obviously wrong shit. (Like his repeated claims he was originally right about the Iraq War, Libya, or whether the US is the most taxed nation on Earth. Sad!)

But beyond that, the "rigging" could only be evident if somehow the election results madly deviated from all the polls. Now, we know local polls can go all wonky--witness the incredible failure of polls to predict the primary loss of Eric Cantor to David Brat in VA a couple years back. But presidential polling is way more granular--there are more polls, different samples, they are taken more frequently, etc. And we can see that Trump has a deficiency with POC voters (Wow, really? Is this a source of shock to anyone at all, even his fans?) And young people are turned off by him. Even if you allow that POC and young voters might not turn out reliably--in general--they bloody well will for this election.

Add to all this the Trump campaign's lack of a strong ground game or strategic ad buys or logical campaigning strategy. There are obvious real-world indicators to point to if Trump loses that do not necessitate an assumption of "rigging".

Long story short--Trump might want to imply that there has been substantial rigging--but he's frigging wrong.
Posted by Vixen Strangely at 12:05 AM