Cinderella Left Her Shoe in the Pumpkin 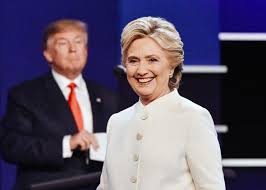 So, this debate was less of a mess than I thought it would be--but Trump really didn't do anything to pull himself up in the polls. Actually, there were assorted things he said that he might have thought would resonate (many of them oft-debunked) but the words I think will linger were: "Such a nasty woman."

A "nasty woman" just bested Trump in the third debate. He can whine about that for the next couple of days, but it's true.

Posted by Vixen Strangely at 6:51 AM