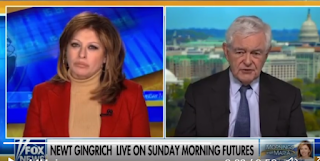 I was just mentioning that Newt Gingrich is a huge part of the reason why you have to treat Republicans as potentially hostile, but Jonathan Chait explained Gingrich's influence on today's GOP more fully in response to Newt explaining to a fish-jawed Bartiromo that in the event of Republicans taking the House back, the January 6th Committee would be going to jail.

Jail? Is investigating a presidential administration's response and responsibilities regarding a terror attack (because the riot that day was, indeed, domestic terror), then why did nothing happen to House Benghazi investigators? Could it be that no random statute exists preventing Congress from investigating matters of government that concerns them?

Gingrich knows that. He's also just trying to inflame public opinion against the committee and try to stop them from continuing their duty because he's partisan trash. He's creating that old "permission structure".  Republicans can have their riots, whether of the Brooks Brothers kind or the more army/navy surplus style one, but Democrats are barred from complaint. Democrats should be locked up.  Hillary Clinton, Ilhan Omar, Gretchen Whitmer, any of them.

But in lieu of jailing people for assisting the January 6th Committee, there is possibly, firing them:

The top staff investigator on the House committee scrutinizing the Jan. 6 attack on the Capitol has been fired by the state’s new Republican attorney general from his position as the top lawyer for the University of Virginia, from which he was on leave while working on the congressional inquiry.

The office of the Virginia attorney general, Jason S. Miyares, said the firing of the investigator, Timothy J. Heaphy, was not related to the Jan. 6 investigation, but the move prompted an outcry from Democrats in the state, who accused him of taking the highly unusual action as a partisan move to further former President Donald J. Trump’s attempts to undermine the committee’s work.

See, Virginia just came under new management, and now they are clearly doing things differently there.  Like, banning mask mandates (even though masks apparently help!) and setting up a hotline to snitch on teachers who might be teaching thoughtcrimes.  So why wouldn't the Virginia AG get rid of a troublesome lawyer? It's probably what Ron DeSantis would have done in his fiefdom state. DeSantis has created a climate of fear, and it really shows.

Republicans talk a fun game about free speech, but hate being talked about. They still want to be McCarthyites and treat dissenters (even Republicans who disagree with them, who are RINOS) as somehow "un-American".

I won't call Republicans un-American, though. Staging coups and voter suppression are as American as Red Scares and cherry pie. I am just saying they are wrong and there is never any good reason to support Republicans ever. Their policies are bad and their tactics are bad, and I can't even chicken and egg which part came first.

This isn't a case of Newt Gingrich losing it--this is who he is and what he represents.  And others of his party in the "comment section" of life say worse all the time.

There’s a lot to be said for the Cheney Doctrine, the One Percent Doctrine: if someone or something represents a one percent chance of being a threat to one or one's family’s safety, one has the right to pre-emptively eliminate the threat.

gingrich (and giuliani) has been a fascist from day one. it's just that now his party has caught up and he thinks he can say these things openly and on national tv.