Here's What You Voted For, Virginia 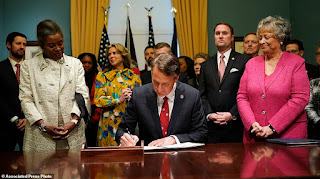 His administration first off banned mask mandates in schools and vaccine mandates for state employees and banned CRT (let's get real: he banned Black History) and totally fired the parole board, the Conviction Integrity Unit and staff working on human trafficking. I'm genuinely not sure that Virginia exactly voted for all that, but it was the stuff Youngkin decided to do first off.

Also his wife's dress is the worst. I am so sorry to bring this up, but it is unflattering in every possible way. Maybe she spent a lot on it, but it is colorful in a bad way, and demure in a bad way, and frowsy in every way. This is not to blame her for any of her husband's policies, but she is married to him and she did choose that dress. And Virginia did vote for Youngkin and these half-assed culture war positions are what they will now have to deal with, because some people thought good effective Republicans who weren't culture war weirdos was still a thing.

It is not. All Republican politicians should be regarded as potential culture war weirdos. Because if you fall for their promises, you will be stuck in photos (history) wearing them like a bad frowsy regrettable frock. It's just not that easy to tear off a stupid and out of touch governor with bad ideas in the way one tears off an ugly dress that looks like chintz curtains with minimal tailoring, except for unnecessary flourishes.

I don't know why I went so hard on that dress. But it all applies to ever voting for a Republican. And if you stick up for the dress on that regular middle-aged woman who could look so much smarter and actually has, I will hiss at you with great vehemence. It's grandmother's parlor upholstery.  I am for liberating Suzanne from all relevant disasters as a feminist and my support starts with saying no to this Calvinist one room church get-up. I am for liberating the US from wannabe famous signifying politicians, so Glenn is on the shitlist.

Make of any of that what you will.

Big "Gone With the Wind" vibes there, if true. Which would be in line with the theme, I guess.

That's not a dress, it is a clown suit. Maybe she was trying to represent diversity, maybe it was a cry for help? We will never know.