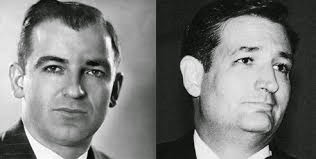 Just to follow on from the preceding post, where I noted that Sen. McConnell is a bit off with respects to what McCarthyism is, I regret to inform that Sen. Ted Cruz probably knows exactly what it is, because he's basically practicing it with his proposition that Antifa be treated as a domestic terrorist organization. And for what it's worth, President Trump also seems to be onboard with the notion (even if people who understand these things somewhat better than Trump find it ridiculous at best, chilling at worst).

Demonization of anti-fascists (remember, folks, the "fa" in Antifa stands for "fascism" and fascism is bad!) is happening at a very awkward time--it has been reported that white supremacist violence is on the rise, but Antifa, as a response to white supremacy, which takes several forms including nonviolent action, is the movement being singled out. What grips me about this is that there are numerous loose groups that protest fascism and racism (not a single, centralized organization) but there is a good probability that language that simply calls this activity "left wing activists" or "affiliated with Antifa" will be used to target any "fellow traveler". (One might recall that HUAC looked into civil rights groups, but kept their paws off the Klan.)

I don't like the implications of it--and with McConnell crying about McCarthyism, I guess I'm just saying it seems to me to be a case of one side accusing the other of the very thing they'd like to do.  And I guess I could just be misreading red meat for a red scare. Except there's also this denunciation of socialism proposed by Sen. Steve Daines.  For some reason, he associates socialism with lack of freedom as opposed to being an alternative to unregulated free market capitalism, but again, this is a denunciation specifically of "the left".

So is this a denunciation of being a leftist, and to what extent? Being a card-carrying Communist Democratic Party member? Promoting social welfare programs? The problem for me with this is the undefined nature of it--how left is too left for our pontificating patriot? And where does the leftist's/antifascist's freedom of speech or association get interfered with, while "we" are concerning ourselves so greatly with the cause of liberty?

I specifically worry about this when I see that Trump and friends aren't great fans of the press, aren't keen on protecting voting rights, have their own--and perverse--idea about what constitutes religious freedom. I do not like it when my government wants to investigate exactly what is a "human right", anyway? when I also have a deep suspicion that it means something less than what I have always assumed it to mean.  And when my government questions who it wants to consider a citizen, given how it now treats noncitizens (and people it can pretend it simply does not believe to be citizens).

A democratic republic is a great inheritance. I look at the rhetoric of people who should certainly know better, and think they are squandering it.