A Handbasket to Hell of Deplorables 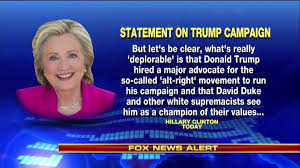 Hillary Clinton got "busted" telling a little bit of not-quite-politically-correct truth regarding who she sees Trump supporters as--she commented that about half of them are in "a basket of deplorables".

Huh. This just seems to me like a furtherance of her comments regarding the symbiosis between the Trump campaign and the alt-right. Nothing much new here. She later pulled back on the statement, but only to the effect that labeling half the Trump supporters as deplorable is probably a bit too high. (Or is it?) But I think the outcry regarding what she said is pretty overwrought. She did not say "half of all Americans"--she was referring to about half of Trump supporters, which is a pool of likely voters according to most polls smaller than her group of supporters. And to be perfectly straight--yeah. There are some scoundrels repping Trump. Like, I mean, his actual campaign representatives. Are in actual fact, not really tremendously great ethical folks.

This should be viewed as a way more questionable situation than whether she actually called him out on it. Trump is repped by people who could be characterized as really openly espousing racist, misogynist, and homophobic values. He himself was just at the Value Voters summit and spoke at Phyllis Schlafley's funeral, in both places showing that the culture war on LGBT rights and women's rights are quite alive and well within his campaign. He has the serial sexual harasser Roger Ailes working with him on how he debates a woman opponent.  He himself has a history of being on the side of white supremacy--a long one.

But does that point to his actual supporters being themselves "deplorable"? The actual fuck. How is that debatable? This blog has noted that his rhetoric has encouraged deeply stupid people to act out in violence against people who weren't like themselves. And this hasn't changed.  There is ample reason to think that Trump supporters include some terribly racist assholes whom he has given permission to let their asshole flag fly.


This comment Clinton has made is not only about less than half of all Americans, she isn't even tarring all Republicans with the same brush. She has acknowledged that conservatives like Ted Cruz have not only been slandered by Trump, but have reason to deplore the way he mischaracterizes what conservatism can be, and holds it up in some ways as the caricature my liberal friends and I at our meanest might depict it as. He made the worst impulses and bitterest Breitbart and Drudge-peddled shit validated. And many intellectual and principled conservatives have looked at his circus and derided it--as they should! I have never followed so many conservatives on Twitter for their real and aggrieved criticisms of what the Trump campaign is about, and look at people like Ana Navarro, and Rick Wilson, and Jonah Goldberg, and Erick Erickson and S. E. Cupp, with some real empathy--they are watching an asshole try to burn the party that sort of houses their values and system of thought down because of his ego and embrace of conspiracy theories and bigotry. I have discovered, now that the lines between what Trump is about and what many conservatives actually want, that there are people there with whom conversation is very possible.

But some of these Trump folks don't want conversation. They chant about locking Hillary Clinton up--not really for crimes, but because of who she is. They go after reporters who say things they don't like, even in antisemetic ways. They are angry and fearful and they will accept every conspiracy theory about Clinton or Obama forever because they already know who they hate and fear, and it includes all kinds of Americans--even ones that have fought for this country. They hate.

I, and many others who have looked at this campaign in shock regarding the atmosphere of sexism, homophobia, racism, and religious bigotry, deplore. Not because we hate these fellow Americans. But because of what their values mean for us, our present, our future.  Clinton wants people to know she is the choice that isn't retweeting White Supremacists and anti-Semites, that doesn't think gay people should face religious segregation, and Muslims shouldn't be banned. That she understands that Hispanic culture is part of American culture. And those who don't--well, she doesn't want their votes.

But she knows good and well Trump can't survive without them. And that is pretty damn deplorable.
at September 11, 2016

Perfectly stated. Her restating of her thesis in her "apology" gives me hope that she's prepared for the Gish Gallop that will be the orange shitgibbon's main debate technique.

Hi Vixen, naturally I disagree with Mrs. Clinton's puzzling assertion. I disapprove of hate speech, of course, and wish that it were no longer part of public life.

However, this scandal has been preempted to some extent by the the events today at the 9/11 memorial when Mrs. Clinton apparently fainted. I have been slow to come around to the idea that Mrs. Clinton's health problems might not be suitable for the presidency. However, the gracious and lovely Alicia and I are in the age category of the candidates, and our view is that her medical records should be released pretty quickly. She is having public breakdowns on a regular basis, and it could be that she should back off and pay more attention to her health.

When you get to be my age, your health is often dependent on whether you stayed in shape over the years. We have always maintained a level of fitness and can still get around with robustness. However, we know people our age who have their lives sitting in chairs watching TV, sitting in the office, sitting at the computer, sitting in the car. And 50 or 60 years of that takes a toll. Mrs. Clinton is looking and acting more like people our age who are beginning to become enfeebled. And then when you think about this “deplorable” statement, you're curious about her motives. You recall she has received concussions. It is a troublesome picture that is emerging.

I feel pretty dismissive about the “deplorable” statement.. it is so obviously ludicrous that no one will take it seriously. Even MSNBC. The gracious and lovely Alicia just hollered at me that she used to be a bitter clinger, but now she's deplorable as well.

Mrs. Clinton's apology or revision of her original statement leaves out one important fact. She does not address what conservatives believe in in terms of a political philosophy. From Edmund Burke through Goldwater and beyond, conservatives have had a set of principles that have been intellectually scrutinized. Mrs. Clinton suggests Trump voters are all voting on the basis of being concerned that government does not care for them. What we want government to do is get smaller. We dislike having to care for it. What we want is for the necessities of government to be as small and efficient as possible and otherwise to get out of our way.

Did Trump help himself when he called Iowa voters "stupid?" Obama was probably correct with his "bitterly clinging" statement, but did it get him votes? I get Sec. Clinton's point, and, with some rounding up, I think she's right, but wasn't there a way to make her point without attacking voters? Sometimes I think SHE's the one who really doesn't want to be elected.

I admire HRCs restraint. I routinely call my Trump supporting friends arrogant racist and stupid assholes. My church lady vocabulary does not contain vulgar enough words to adequately describe them.