Trump Gets The Best People--Believe Me! 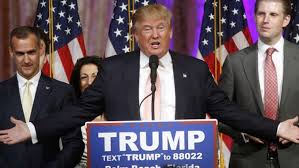 Now that Donald Trump is on his third campaign manager, and some extraordinarily choice allegations have come out regarding his campaign CEO Steve Bannon (is campaign CEO even a thing?) isn't it time we looked into Trump's claim he will get the very best people to do...I dunno, politics stuff...for his presidency, if that was the sort of thing we were going to do?

It's doubtful whether the best people is what he's actually looking for.  I mean, it's seriously questionable.  Let's face it--who decides to have Michele Bachmann consult for foreign policy and KS Gov. Sam Brownback consult for economics?  Who decides that you have a Christie associate who was madly disavowed by the NJ Gov. post-Bridgegate, Bill Stepien, appointed to anything, as if that wasn't going to become the story?

All of these choices are kind of questionable. Does Trump get the best people, or, as with Kellyanne Conway and Steve Bannon, does he just accept a package deal from one of his main contributors?

Does he know what he is even doing here, or is he so dopey he just does whatever the people he stupidly trusts tells him to do?


What I'm getting at is, does it look like Trump even runs his campaign based on who all is in it? Does it look like he's even involved? Like when he reads from a Teleprompter and he confronts the words like they are fresh and brand new to him?  Do you want someone who does not know how to pick the best people--and picks the most nonsense folks to exist ever as his advisors? Because that is apparently the status of Team Trump right now--nonsense people.
Posted by Vixen Strangely at 11:47 PM