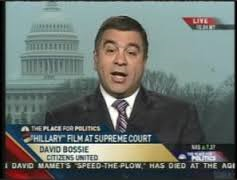 There's nothing quite like the news that here we are in September, and the Trump campaign is still making leadership adjustments--like taking on a new deputy campaign manager, which makes total sense because Kellyanne Conway, the current campaign manager, does an awful lot of press for someone managing a national campaign. And who better to help her do that managing thing than David Bossie. You know, the guy who was fired from the Whitewater investigation during the "throw all the spaghetti at the wall and see what sticks" period of 1990's Clintoniana, and went on to run Citizens United. (The "Hillary: The Movie" Supreme Court Case Citizens United, not to be confused with Citizens United Not Timid, a very puerile vagina-related joke organization started by Trump's very good friend and long time creep, Roger Stone.)

Just judging from the dramatis personae at Trump Theatre, it looks to me like this is mostly turning to a "smear Clinton" op, not a "win an election" op. Superficially looking over what the campaign is investing in, they've got a poor ground game, a super weak ad presence, and their fundraising just looks like a straight-up con. One of the Trump Team's exiting Latino surrogates, disappointed by Trump's recent AZ speech, basically said that from what he observed, they aren't trying to win this election.  But what this team is set up pretty well to do, is bust kneecaps while Clinton crosses the finish line.

Look at the rogue's gallery--take sweet Kellyanne Conway for example. She doesn't seem like a vicious operator, but her spouse was a probable Drudge source back when. We can't pretend Roger Stone isn't "working" for or with Team Trump. Roger Ailes, whose cable network got great ratings from constant Clinton drama, is on the fringes.  And, you know, Steve Bannon is Steve Bannon. They've even picked up Hillarycare basher Betsy McCaughey as an economic adviser.  It's like the Trump Campaign is a Giant Vast Right Wing Conspiracy Bot, made up of smaller Vast Right Wing Conspiracy Bots.

So the playbook looks to be--lose ugly, gouge eyes and bloody noses, and make sure that if Clinton is going to take the White House, it's under a cloud of media scrutiny--and of course, our stupid ass media is happy to comply, and the for now GOP-controlled House understands what they are to do implicitly.

So once again, instead of actually doing a damn thing to "Make America Great", we've got a stable of dirty-tricking ops who think "winning" is beating down Democrats, instead of actually working on policies that affect people's lives. Is there any wonder so many people are apathetic? But knowing all these people have a certain history just makes me want to ruin them so we can skip to the part where government functions the way it's supposed to. It's just this goofy fantasy I sometimes have.
Posted by Vixen Strangely at 12:01 AM

One of the coups of toxic right-wing toxic talk radio and Faux News was screaming Clinton consortia theories louder and louder and louder until the Lamstream media picked them up to avoid that awful charge of liberal bias.

The mainstream media learned a lesson about what later came to be known as "clickbait"--Clinton drama is good for clicks. Eyeball ratio is a good advertising ratio--except. Except. There is such a thing as bad attention. AP and NYT are nakedly performing acts of bad faith and this is not good for them in an age where we're just more Net-savvy--what played in the 1990's when cable news dominated can't quite where social media and fact-checking becomes more standard. I'm for using my little platform for holding them accountable--it's why I'm here.