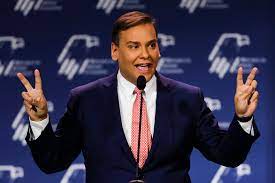 The New York Post reports that George Santos is now saying that the money that supposedly made its way into his campaign as a personal loan--like about a half a million dollars? Was not from him. Which makes sense, because despite his manufactured business success, he was poor just a few years beforehand.
Is he saying where the money really did come from? No, he is not. Does that seem pretty damn sketchy? Yes, it really does.  Could we presume having a benefactor laying out large sums might unduly influence the votes of a legislator who seems to have no moral center? Sure, might could. Does Squeaker of the House Kevin McCarthy have a problem with this? (And like, the guy is going to be in so much trouble with the FEC and also probable wire fraud crimes and shit.)
Not at all. Schiff and Swalwell, sure. Deeply problematic (read: effective). But to his mind, the possibly tainted serial liar and larcenist freshman representative is not a problem.
We know what Santos is. But what supporting Santos says about McCarthy (and also his weird fatal attraction to Marjorine Tater Grease) speaks volumes about what his leadership is about. And it's a full-body shudder from me, folks.
Most New Yorkers want this guy to resign though.
UPDATED: Guess who is a sort of illiterate who expressed a funny HAHA comment about Hitler?

Yeah, me included, a lot of people were giving the benefit of the doubt with respects to his supposed white pride fingers: 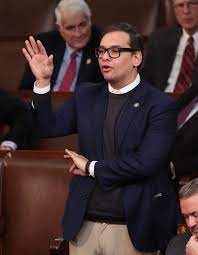 Even though we knew some of his social media was giving pure trash. So, I wasn't going to say our boy was a straight up white-ish supremacist based on one little hand sign, but now I just have to say--it looks like he is to me. Serving Carl Palladino with the Michelle Obama trash talk. Also, too, the same illiterate writing quality turns up in his weak Wiki bio. If that is him. Notice also the aspirational dipshittery of wanting to be associated with Hannah Montana--and the idea that he could be a model in Vogue expressed elsewhere. Why is some of his supposedly college-educated language so poor, and once again--born in Queens or in Rio de Janeiro? Do we know for sure that we know?

His psychopathic style is like improv--always saying yes! Attempted hostage taking on 5th Ave--yes! Brain tumor--yes! Volleyball championship! OK GO! Does his campaign even have a treasurer--YES! Even though the person whose name might have been forged on paperwork says no.  That's amazeballs! Who retcons an entire whole human who can refute your bullshit into your campaign?

And he is still a congressman!