Herschel Walker in the House 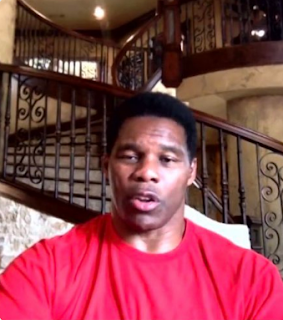 Sometimes when we want to define a thing, we ask "What do you call it when it is at home?" If you wanted to define Herschel Walker (recognizing his pronoun is not that of a "thing" even if he proclaims no understanding of what a pronoun is) , I can tell you readily what to call Herschel Walker when he is at home:

But the real reason I'm envisioning Walker in his house is because that is where he seems to be envisioning himself. In the basically tied US House (or Senate--hard to say):

In a brief interview with POLITICO on Saturday, Walker seemed to mistake which chamber of Congress he was running for and also appeared to think the outcome of his race would determine control of the Senate.

This is a C- effort on a Civics quiz. It's a whole F as far as someone actually running for the Senate goes. As in W. T. F.

He really does not seem to know what he's running for. And yet, I still think (while I'm optimistic for Warnock) this will be close and it's a shame that Warnock has to be purely exemplary, and a Republican can go ahead and be...this.