The GOP Are Who We Think They Are 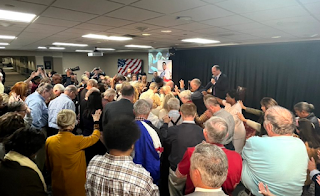 So, when news broke that Herschel Walker was accused of having paid for an abortion and there were receipts, I knew instantly: that wouldn't move the needle. After all, Walker has been rambling in public with sentence fragments that make no sense at all, has claimed multiple personality syndrome, has admitted to holding a gun on his ex and even playing Russian roulette, and has make various statement about his college career, sports, his charity, and what he even does for a living, that are frankly, just not true.

And the polls vs. current GA. Sen. Raphael Warnock are still awfully close. Republicans have a very high tolerance for fuckery when it comes to people with an "R" after their name.

I mean, you could look at Roy Moore as an example, or Trump after the TMZ video and multiple allegations of sexual harassment or assault. But it isn't just about sexual allegations. I mean, Steve Bannon conned anti-immigration conservatives out of their money over "Build the Wall" and he still has support. Alex Jones is lying grifter, and he has support. The GOP still has a big tent, it's just really looking a lot like a sideshow.

So, the image about is from a prayer held over Herschel Walker the very next day wishing him protection and support. The GOP circled the wagons at once and his campaign had record fund-raising. He was clearly a VICTIM! of a vicious left-wing smear of the kind that was entirely true but why did anyone have to be a bastard and TALK about it? Including his conservative son, who had finally reached his limit on discussing his father's messy as hell personal life, and understandably so.

Dana Loesch probably put it best when she said:

"I don’t care if Herschel Walker paid to abort endangered baby eagles," she said. "I want control of the Senate!"

Loesch went on to dismiss the significance of the Walker abortion claims in even starker terms.

"If the Daily Beast story is true, you're telling me Walker used his money to reportedly pay some skank for an abortion, and [Sen. Raphael Warnock] wants to use all of our moneys to pay a whole bunch of skanks for abortions," she said. "So, it doesn't change anything for me!"

It doesn't matter what kind of person Walker is, he's a Republican. And even if he was fucking around and paid for an abortion, it's the girlfriend who is the skank (that feels revealing). And "all of our moneys" to fund abortion--she isn't really considering abortion murder so much as the kind of health care she would rather not fund. Not that conservatives ever want to fund medical care.

Of course, the other interesting detail is people kind of knew this was a thing all along. It's hard to imagine that Walker was vetted at all, but with the unclaimed kids and this abortion thing being out there--uh, they knew he had dirt and didn't care and he was just good running anyway (despite what it might mean to other members of his family).  Conservative commentator Erick Erickson called it "old news" on Twitter: 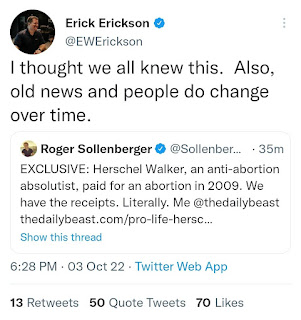 And I just don't see any way on earth he'd be so forgiving of anyone having an abortion who was not running for office as a Republican.
A funny old thing though, is the abortion allegation in The Daily Beast isn't even necessarily the only one, and just like with his children, additional stories may await. Which is not something I judge him for--paying for your partner's reproductive choice because you also have some responsibility and even being tender about it and sending a get well card is not terrible. It's just the hypocrisy--claiming abortion is murder and implying governments should jail women and abortion providers and put a bounty on their heads, with no exceptions doesn't line up with giving Walker a pass--unless your one exception is:
Except if you are a Republican candidate for office. There are no "values" here. Just love of power.  And a permission slip called claiming victimhood whenever they get called out for what they do. We said goodbye to Al Franken. We didn't shed a tear over Eric Schneiderman or Andrew Cuomo, and I could not tell you where the hell Anthony Weiner is now.
We just are not the same.
UPDATE:   The woman who received the abortion is also the mother of one of Herchel Walker's other children and they had a long-term relationship. Walker claimed he had no memory of any of this, to which:

“Sure, I was stunned, but I guess it also doesn’t shock me, that maybe there are just so many of us that he truly doesn’t remember,” she said. “But then again, if he really forgot about it, that says something, too.”

The woman, a registered Democrat whose years-long relationship with Walker continued after the abortion, told The Daily Beast that her chief concern with revealing her name was because she is the mother of one of Walker’s own children and she wanted to protect her family’s privacy as best she could while also coming forward with the truth. (Walker has publicly acknowledged the child as his own, and the woman proved she is the child's mother and provided credible evidence of a long-term relationship with Walker.)

The Walker campaign declined to comment for this story.

I would say this was shocking, but that's not even a thing anymore, is it?

American's Great National Pastime is pulling one over. Doesn't matter on who. Or whom.

You're not a "success" till you've fucked someone over ...