Many Ukraine/Russia Commenters are Confused 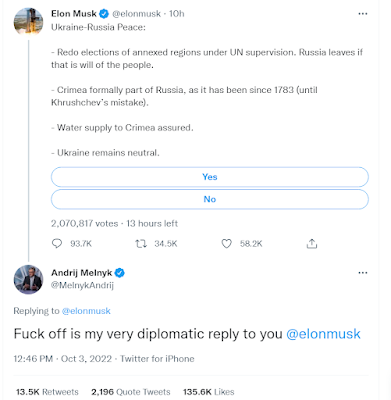 After Russia has tried to bomb the hell out of maternity hospitals and schools and places clearly marked for being where children were sheltering in place, and after kidnapping tens of thousands of people, and trying to punish the Ukrainian out of the kidnapped children to make them Russian, after all these understood tactics of genocide? No, I don't think any of these things are appropriate, and "Fuck off" is the only answer. Ukraine doesn't have to negotiate shit, because they got invaded by Putin on bullshit made-up terms that even he lets on were always fake: he wants territory, the territory formerly held whenever but certainly not considered Russian territory this minute.

Putin's history is wrong, and the support of it by his apologists are wrong. When Russia was supposed to have a neat little 72 hours war or so, maybe there was reason to think Ukraine needed to negotiate.

It's been longer and costlier than Russia anticipated, and for people who bothered to listen to what Putin has actually been saying about his hopes for westward expansion, support for Ukraine has only become more necessary as support for the borders of sovereign states who already have self-determined. If Ukraine falls, who is next?

It has become apparent that Ukraine needs to win, and I don't even know where these "negotiate people", these "sue for peace" people are even coming from.  Russia, in their fake annexation and mass mobilizations are committing themselves to a path from which there isn't an off-ramp. This isn't fixed at any negotiation table. It stops when Russia pulls back a helplessly bleeding stump and realizes shit isn't ever going to get better for them.

The annexation votes were bullshit, and never should have been staged, so how the hell should they be re-done? When those loyal to Ukraine have been relocated as refugees for their safety? How do you manage anything approaching serious and fair? How do you re-introduce the original citizen pool safely?  You don't.  The idea of the vote itself is an affront. A lie. An imposition.

As a humanitarian issue, of course people should have the right to water. but that is a human rights issue that the instigator of the aggression--Russia--should consider their responsibility and should be rightfully sanctioned for what they fail to achieve regarding human rights--

But that's a fucking laugh, isn't it? These Russians are rapists and torturers. They don't care about their own people. They've been thieving from Ukraine for their own material benefit. No one at the top of the Russia food chain thinks they will ever see repercussions for what they've done, even if it should wind them up in the Orange Hotel.

And don't get me started on how Ukraine is supposed to stay neutral after all of this. Would I if this was what was done to my country? Would you?

There isn't any room for negotiation here. and for US quislings who want to relent on Ukraine aid, I am telling you: Putin isn't your potential benefactor so much as you are his potential bitch. If you think the US way of life is superior, you don't fucking cater or crater to his influence, because he is planning to expand it and already has made inroads to do that.  If you want America First, you don't place Russia anywhere on your priorities. We are not buddies with Putin. He isn't even a necessary evil.  He's the kind of evil we can do without.

People missing this understanding have slipped a cog in their cogitations.

The Ukrainians in WWII were considered the best soldiers in the Soviet army. Apparently, nothing has changed. I'm expecting them to rid themselves of Russians. It may take some time, but they're fighting for their own country now and not for some hedgemon...