It's a funny old thing, Putin claiming he has possession of these regions and that they are inviolately Russian. The regions in question don't even really think that. Putin held a "gun to the head" referendum and forced an agreement to maybe consider Russia in charge of certain regions so that the people living there don't die.

Much of his speech sounded like it was about culture war stuff crafted to appeal to a certain segment of the West--the kind that looks up to someone like Giorgia Meloni, or like Trump. He actually sounded a bit like he was jealous of Orban and his welcome at CPAC. No one should think what he is doing here boils down to concern about pronouns or liberal decadence.

It is a naked power grab and his claim to this area is without any merit at all. 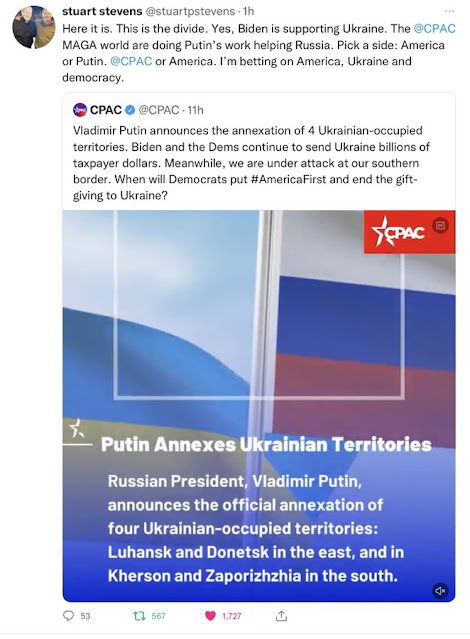 Apparently, CPAC Tweeted, then deleted, a post referring to the territory Putin just illegally annexed as "Ukrainian-occupied" and the military aid the US is giving to Ukraine as "gifts".  The idea of the "free world" means nothing to them.

I'm guessing it's less about freedom and more about freedumb. Not sure how the GQP got so corrupted and bought into the stupidity in such a short time, but apparently this is where they are. I'm still hopeful that Ukraine and their allies will kick Poo-tins ass all the way back to Moscow. He deserves no less than a proper thrashing...

Everyone who attends a CPAC conference should be given materials on how to apply for either a Russian. We ought to raise money to help them to emigrate to a country more to their liking.

It doesn't really shock me that US conservatives are the ones falling for Putin's hustle because they are conditioned to fall for hustles: every tv evangelist or RW thinktank employs aspects of the hustle. Are your men manly enough and your women womanly enough? Are you feeling a little downtrodden lately? Are people disrespecting your point of view? Aren't you worried there aren't enough of "the good people" around? Why aren't we making more of them? Are you worried about the youth of today and them embracing the decadence of tomorrow? What's so wrong about dedicating oneself to the church, the kitchen, the children, the state?

And the SWAG! Flags and parades galore! Do you like fireworks! Oh hell, there will be fireworks! And with STRONGMAN, there will 100% be an effort to smoke some "other" people with guaranteed 4 hour boner results! You cannot miss this opportunity. These hate boners only exist for how long in anyone's lifetime! ACT NOW!