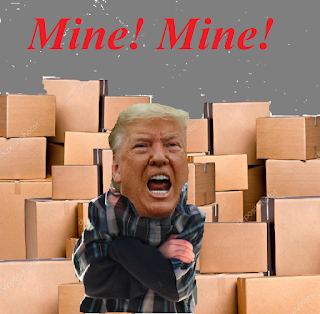 Apparently, we're at the point where people are exhausted enough with the Trumpaganda to start saying true things, and among them is, Trump saw White House documents as being his, for him. He did not understand the idea of US intelligence as being something for the US to protect the US. It was his. Because he doesn't understand that the US doesn't revolve around him.

Really good lawyers don't want a part of his case, and there's good reason. He's a bad client. He does weird stuff like making negative public statements and apparently trying to gin up a violent reaction among his fan club, That's the sort of stuff good lawyers would recommend against. He doesn't have good lawyers.

Among silly things his inexperienced lawyers have done is tacitly suggest civil violence. And also suggest they want the affidavit to be released so that there can be witness tampering. It is really weird when lawyers are fairly open to suggesting that maybe their legal strategy is obstruction of justice, but that exactly sounds like the strategy Trump would want. He loves witness tampering and obstruction of justice! They are his LIFE!

And you know, when one of your "reasons" for why you took the documents is so that the various entities looking onto your business (1/6 committee, assorted grand juries) can't get hold of them, that's bad. It's obstruction of justice, as well.

He doesn't own those documents. But he definitely owns this trouble--you could say he brought it home with him.