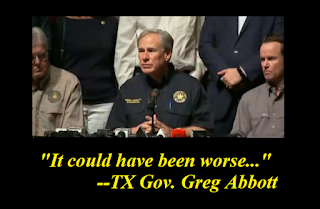 Gov. Abbott is livid that he was misinformed about the police response and that so many things he said in his comments following the tragedy and later on Wednesday turned out to be entirely wrong. The shooter had an AR-15, not a handgun. There was no resource officer on campus. The local cops were on the scene but waited nearly an hour, even stopping other officials and parents from breaching the classroom due to the wrong idea that the shooter was barricaded and no longer an active shooter--when he was locked in a classroom actively still killing children. And the children in the room were still calling 911.

It could have been worse--but it is glaringly obvious that it should have been better. (It should not have happened at all. That young man had warning signs including animal abuse and misogyny, made threats and previously tried to get his sister to obtain a weapon for him. A red flag law may have stopped him,)

If the governor is livid, I'm going to suggest that Uvalde Mayor Don McLaughlin (who was calling Beto O'Rourke a "sick son of a bitch" for interrupting the solemn lying because of politics) probably helped him get misinformed. The chief of police has his share of the blame. But to some extent, the worst kind of misinformation a man in a position of responsibility allows is the kind he invites.

The "good guys with a gun stopping the bad guy with a gun" story was the narrative he wanted. It was more complicated than that. It always is.

Found this on the Internets:

As an ex prosecutor from Uvalde, I can say based on my past interactions with Uvalde PD, you will never know the truth about what went down in that school until every inch of video tape is released to the press.
8:38 PM · May 26, 2022 from Midland, TX·Twitter for iPhone

From all the "defund the police" talk vs LE complaining about not having the resources, I look at this in a pretty jaded way--what resources did the local police lack? There was a school resource officer (we just don't know where they buggered off to) there was a part-time SWAT team (I guess they failed to have an emergency during the right working hours) there was back-up (CPB officers, etc) they had active shooter training, and the thing they wanted?

Will. To want to save those kids? I'm not saying I'm LIHOP, but my goodness...what did they need?