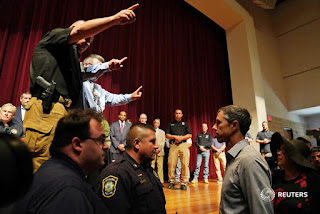 Democratic gubernatorial challenger Beto O'Rourke interrupted the assembled unified Republicans at their press conference whilst they were performing part of their sacred office--moving from the ritual saying of thoughts and prayers that sanctified the slaughter of the innocents, to the Ceremonial Blaming of Other Things.

By pronouncing the feared "assigning of blame to Republicans about anything, ever", there was a narrow danger that attention might be directed at the people in the room who literally do less than nothing every single time this horrific nightmare happens. O'Rourke was expelled for the grave sin of politicizing the solemn event, because you know, people who politicize human misery are the wooooorrrrst. The danger past, the Republicans went on to assign blame to various things, like mental illness and doors, as others suggested rap music, fatherlessness, and lack of prayer in the schools.

This is how Republicans demonstrate that they are so very serious about gun violence, in addition to mentioning Chicago. They will probably all go to a nice NRA event in a couple of days and their jowls will cease to quiver with rage about the heathen who violated their safe space with the threat of accountability and reality-facing.