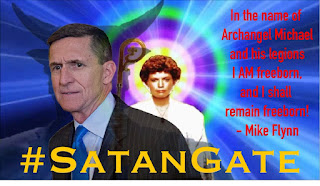 Now, when Kyle Rittenhouse went on Tucker Carlson's show to tell the world that his first counsellor, Lin Wood, was a goddamn money grubber, it was almost worth the attempt at reputation resuscitation being attempted right there on ye olde tv screens. After all, Lin Wood was the guy who decided that the election system was so corrupt that he basically sabotaged the Georgia Senate runoffs to ensure Democratic control of the Senate, and that's no small deal. But shit has gotten terribly real now, because Wood's injured pride has him diming out the other Q-associated grifters, and yes, this is glorious.

Now, I obviously don't love Mike Flynn, so we are gonna start with him, because how can we not, since he is the Russian-connected goon whose digital warriors furthered Pizzagate and assorted racist memes back in 2016. Yes--goon. He thinks he's a general, but since his forced retirement he's a catspaw for whoever's paying because this chicken-chested little very much fired from the military fuck for brains doesn't understand that he sold his credibility, his honor, and damn nearly sold out his country, but is getting the unique opportunity to sink into ignominy before getting properly keelhauled.

Mike Flynn both started Q and doesn't believe in it because he's a Satanist. Well. if you were paying attention, you know that. Think a little bit about the allegations that "Where we go one we go all" is supposedly similar to a Flynn family saying, or consider how so much of his family has become so involved. It's weird. It's a front for Flynn selling out his country. He has taken money from Turkey, from Russia, and who knows what his intentions with Saudi Arabia and Qatar ever were, except he wanted to sell them nuclear technology. Which makes his goofy repetition of Elizabeth Clare Prophet's seven-fold rays and legions prayers seem even more apocalyptic and antichrist. The seven pointed star of Babalon. The "legions" cast out by Christ. He's so committed to snowing and bullshitting his followers that he sometimes lets people see the truth--just not long enough to understand how they are corrupted with it.

But he mostly just wants to make money selling nukes to extremists.

Anyway, apparently Stop the Steal was always a money-grifting lie.  Who knew?

You should know Patrick Byrne is a maybe rapist who thinks the least of Sidney Powell--and I don't even know how to process this. I don't want this happening to any person even my idea of the worst grifting deluded person, and so I care that this might have happened to Ms. Powell. It is disgusting, and I also think Byrne is capable of this species of bad things. Because he considers himself a stud because he was played up most professionally.

Anyway, the "Stop the Steal" stuff that Lin Wood now says is bullshit has at least ruined one player--the lead on the Cyber Ninjas thing. That clusterfuck was supposed to look professional enough to encourage others to do audits in their states but it actually looked like a turtle fucking a football. And now there won't be any more monies, the end.

Anyway, I don't even know who all will end up being called out of their name and all, but I don't mind it. I hope it gives the FBI and them so many leads. I mean, to give the Devil his due--aren't people telling on themselves right now?

And isn't it a damn shame? Or just damnation?