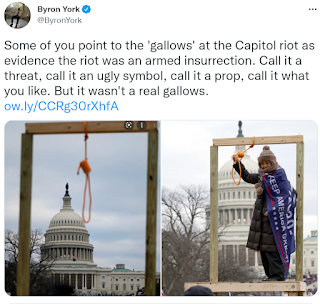 So, think fast: someone sends you a photo of an Airsoft pistol held at your kid's head, no context, your kid looks upset. Thoughts? So, think fast, you are at your job, you clock in, and there is a hangman's noose (so tiny, no one's neck could fit in it) stapled to the calendar hanging in your cubical. Think fast: Someone you don't know emails you a photo of just a really big knife. It's an email--not a real knife at your neck?

Do those things make you feel safe, or do they imply someone wants to display they have the means and intent to do violence? Because Byron York in the perfectly imbecile Tweet above (screen-capped, because fuck him and his Trump-terrorism apologetics) seems to think that because the display of a gallows mock-up that wouldn't possibly sustain the body of Mike Pence for lynchin' purposes, is not a real gallows, and therefore, does not substantiate that murderous intent of the crowd that mobbed the Capitol. And because it would take an awful lot for the wee bitty weapons most of the mob came with to do bodily harm, maybe they were almost like tourists. How preplanned and intending to do murder could they even be?

I was taught from a young age it is completely possible to kill a person with your own hands and feet and nothing else when I was much younger and smaller than Byron York is. I never discount what a motivated and not entirely rational person could do in the heat of a moment, but when someone brings a weapon into something, you know they carried it from the first with an idea of what they wanted to do with it. You can ice a person with a goddamn stone or a tree branch. Our caveman ancestors did it. You don't need much. Faces and throats are fragile. A short drop hanging with a badly tied rope leads to a long agonizing suffocation death. A long drop from a stout arm is a merciful neck-breaking. But either way--you can kill.

This backwards fool literally lists the various improvised devices the rioters beat other humans with as if it was inconceivable to imagine that any of them could be a weapon, when absolutely any of them could be one featured in a crime tv show. As if to imply: Unless your weapons come from the AK-47 region of firearm, your terror is apparently just sparkling dissent! (Triumphant Right-Wing Pundit Gets Paid for this Shit Jazz Hands!)

There were about 140 law enforcement officers injured. People did lose their lives, if not immediately on scene, in the aftermath. And the point of the insurrection mob wouldn't have been a massacre anyway--but the delay. The point wasn't doing murder and bloody harm--it was creating fear and setting up a possibility of the electoral votes not getting certified that day. And warning people  that there was more where that came from. They wanted to create an atmosphere of chaos where somehow, someway, someone would declare Trump victorious.

That things didn't go as planned as far as that goes doesn't mean what they did wasn't serious, planned (or at least guided by propaganda and a handful of accomplices) and intended full well to put the fear of death into lawmakers and the Vice-President alike. And that is, all those apologetics aside, quite grave. They wanted to brutally coerce others by acting outside of the law with force, to do things contrary to the Constitution and our founding democratic values.

Trying to mollify that reality is disgraceful. It isn't exactly giving comfort and aid to an enemy, but it certainly is comfortable to their narrative and would aid further sedition were we to allow this kind of lazy knee-jerk partisan apologetics to avoid the most serious condemnation. York is too shallow-brained to know what he's about, is all, and the Washington Times is what it is. But people who actually think as a matter of their existing on this planet can easily understand why he's fucked up about this and should be told to soak his head in something that would make it smart.

And I'm sure that if I looked, I could find instances of "terroristic threats" where no real weapon was used. But those "terrorists" would be melanin-enhanced, I'll bet.

Regardless its diminutive stature, that is a fully functioning gallows.