At the rally last night for GOP VA Gov candidate Glenn Youngkin, they said the ‘Pledge of Allegiance’ to a flag that was carried during the insurrection on Jan 6, as if it was sacred or something. pic.twitter.com/NGEaFFAvdF

History might not repeat itself, but it rhymes, isn't that how the saying goes? Anyway, the opening line to the Horst Wessel Lied is "The flag is high and our ranks are closed...". Consider the flag that of the blutfahne. A flag from a failed coup attempt, raised high? Ranks closed around a certain big lie? So Trump offers birthday sentiments to his own Horst Wessel to rally, one shouldn't wonder, his shock troops. (Yes, shock troops: SA. Stormabteilung. Paramilitary street fighters and shit stirrers. They aren't even being fucking subtle with it.)
But I mean, people have pledged their support to Trump in this sort of abjectly personality cult way, before, right? 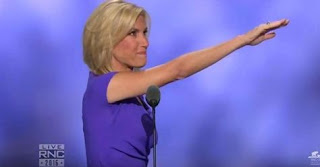 And it supposed to be ridiculous. Don't be ridiculous, why would people be doing Nazi stuff in plain sight, right?  It's liberals being paranoid, obviously. Of course the kind of Kulturkampf spoken about by conservatives like Pat Buchanan is just a blind for disdain for jazz music, wild women, effeminates,  wacky tobaccy and pro-religion to appeal to the real working class values, and not a challenge to people of various ethnic and religious and sexual minorities.
And yet in Texas, a school district thinks maybe being anti-CRT (which is stupid on its face) should mean giving equal time to Nazis if you are teaching the Holocaust. Because teach the controversy, right?  (Except, you don't get far into Nazi literature before you get to their admiration for the US racial science--eugenics, and the exact kinds of lawmaking CRT is exactly the study of.) It's like they want to direct you to "Mein Kampf", but downplay the struggle for Civil Rights. They don't want you to know Letter from a Birmingham Jail.  They want people to see BLM as Communists because that's who they want to blame for unrest, not the lawless lawmen who fail their communities by not upholding the peace. And I don't feel charitable enough to think it's unwitting on the part of the astroturfers who spawned the movement against our school systems.
They already tipped their hand by demonizing antifa. I mean--canary in the coalmine, much? (They wanted to blame antifa for a capitol attack, but cell phones and social media fucked that up.) But as to the curriculum: Children must be carefully taught, after all. The future belongs to them, etc.
It's the obviousness and the preposterousness and more that makes people fail to say it aloud. But the GOP has decided to lean in on evil. Actual, palpable, destructive evil.  They don't care if people experience passive eugenicide by Covid-19. They think weird things about their purity of the body. They are beset with superstitions (Q--which is exceptionally anti-Semitic and centers blood libel.).
This trajectory sucks. I'm no pedagogue, but how did so many people fail to know any of these signposts of upcoming extremist fuckshittery as we were sailing right through them to the "between coup attempts" stage of US history?
I also know the answer to that--they didn't want to know, or didn't want to believe.  But we can talk about it now and we better, right? Because for so many of us, the outcomes of the Trumpists winning are fatal. Just literally, not figuratively, not hyperbolically, fatal.
at October 15, 2021

civics isn't a thing that's taught anymore, history is taught, but mostly taught badly. i have an...acquaintance who is a fellow red-sea-pedestrian, (albeit an israeli one) who is SURE antifa are the actual fascists. it boggles the mind.