Jon Kent Can Be Anything At All

One of the dumb things about the discourse is the predictability of conservatives crying "woke" at stuff that threatens diversity. I mean, so what if Kal-El and Lois Lane's kid comes out as bi? If someone wants to call that woke--okay, they are woke to the idea that bi people exist. Bi people do. Is it supposedly woke to say people who exist deserve to have stories about them? It is dumb to concede bi people read comics, too?

And for the people who want to say, "What about the children?" How dumb! I want to introduce you to the reality that kids know they are bi when they are still kids. And some of them love comic books very much. And maybe they are attracted to comic books because the idea of metahumans in worlds like those created by DC are ways of telling the stories of people who are different, but still do the right things, are open-hearted and fight for people who don't have power, who experience alienation, but still belong because of the causes they fight for.

I feel like people who want to critique this with a "woke" lens missed every little thing about the major comics heroes we all knew about growing up. Is your Amazon princess totally straight? Are Batman and Robin historically queer-coded (and with Tim Drake, finally, an out Robin)?  What do Marvel X-men really learn about themselves during puberty (have they tried not to be mutants)? 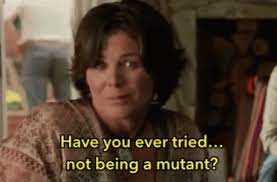 Maybe in a fictional universe, it isn't "woke" for the characters who are human to be subject to the same identities as any human being. People come in all shapes, sizes, ethnicities, sexualities and gender representations. It isn't wokeness to represent them, it's reality. They exist. They get represented. Even in a fictional multiverse where physics-defying things might occur. Stories aren't obliged to explore only your own code of who matters and should be represented. They can be for anyone who understands that the cause the hero fights for is the thing. Sticking up for the underdog. Pulling for truth and justice. Giving a damn about human rights, and the rights of the nearly human. Including the alien. The mutant. The eternal "other".

So no one gets to tell me Lois Lane's grown enough baby son can't love whoever he wants to. Both of his parents are brave and open-minded, and their kid has been to the future. Fictional Jon Kent can totally know what's up with his sexuality.  It seems like people just don't want to see bisexual people represented for some weird reason. And maybe that's their problem?

Yeah. I'm saying if someone can't perceive that others can love someone or be sexually attracted to someone else regardless of gender, they are missing how human, how much a part of human experience that thing is. Human beings are made to care about one another. Excluding someone for who they happen to care about is strange. The thing that matters is how we treat one another: with respect. With consensuality.

So if someone tells me they resent Jon Kent being queer because of wokeness, I guess I know how they will understand me. They won't . They don't want to understand other people. They have decided toleration is a kind of weakness, if not a sin. And they would judge any of a number of other people for their various strangenesses as wrong and to be disregarded also.

I have a weirdo digital name and footprint and have sometimes thought about it being like my secret ID. But people are with their whole chest with their real names and all going to say it's wrong for a fictional character to be bi, and we shouldn't take in the subtext they mean bi people shouldn't be? Or maybe even gay folk at all? And....?

No. I am not playing with that. Our characters will be represented because we are here. We are queer, and you will get used to us. And we can even be heroes.

ten bears- a few years back. jon was a little kid for quite some time and then got aged up two years ago like an eighties sitcom character to his teens so he could join the rebooted legion of super-heroes.

Jon Kent can be anything he wants to be.

How long have we been tossing this word "woke " around?

It is a new word and i don't like it.

I come from a long tradition of botanists, entomologists, artists, you name it, there are dedicated scholars.

We are nerds and our mission is to protect the world.

All of us "ists" are on a quest to learn.

It is when people go into "isms" that the trouble begins.

So i don't like that word "woke". It is a pejorative term.

The thing with "woke" is, it used to be really specific and positive before it met wide distribution. "You stay woke". "You get woke". It specifically meant: be aware of what is going on the world. Being woke was like knowing what was up. Then people with no clue at all starting using it the way they made up "politically correct"--just a crass way to be dismissive of other people's way of being or to make light of how other people could be harmed by the isms--the racism and sexism and so on. It's sad to me that the original term got taken so far out of context because it had a use. To say, "Don't sleep on the world around you. Pay attention. See who pulls the strings, who gets hurt and who benefits in this life." It shouldn't have been pejorative, but here we are.

"Ists" try to know the answers, "isms" are answers fossilized in amber. I'm always interested in dynamics. How is a thing working in reality? What are people doing with a concept? And dynamics can change, and there is always something new to learn. I consider that learning is a conversation not a collection, because picking up something doesn't always mean it is useful, and understanding something sometimes means finding out something new. If the world can be protected by nerds, I sure hope I'm doing my part.