You Wouldn't Take This So Lightly 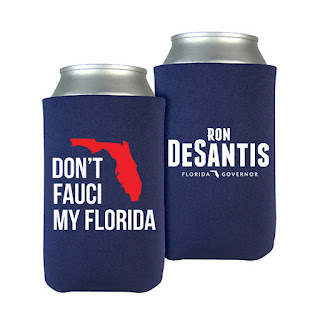 I don't know know how I would personally feel if the state I was supposedly running just broke its record in COVID-19 cases and also hospitalizations, but I absolutely imagine that if I had even thought about scoffing at the seriousness of the pandemic by making whimsical campaign merchandise* about flouting simple, solid, epidemiological advice because CULTURE WAR!!!!!, I'd probably feel like 31 flavors of untreated raw sewage. But I don't think Ron DeSantis is that kind of guy: he's probably all good with it.

How do I know?  Well, he's even implying he would let his own, too-young-to-be vaccinated kids go maskless (similar to uncanny Valley Girl and Trump by marriage Lara) while promoting an executive order to let parents choose whether kids have to mask or not--basically banning local mask mandates for schools. Even if we know pretty well that having the unvaccinated mask is a really good idea.

It's a decision that doesn't seem all that great, to me. Pediatricians are saying the Delta variant of COVID-19 does spread in kids, and whether it's uniquely dangerous to them or not, why the hell spread it, and why the hell let mutations flourish (ok, that last question is mostly mine, but,  seriously, give it time, and maybe some variation will escape vaccinations and be deadly AF--so why tempt fate?)

Right now, people are losing their  unvaccinated family members (and even some sicker or older vaccinated family) and begging people to get vaccinated even if they weren't big believers before.  There isn't one thing in the world wrong with making the choice to both vaccinate yourself and urge it for the people around you--and to mask yourself just because you could, temporarily, be capable of breakthrough infection and spread. It's just a civic duty and a kindness to others. It's just caring enough about the people around you to not want them or their loved ones sick, any more than you want to be sick or see your loved ones sick.

But for some reason, the right wants to stigmatize that choice. They want to silence the doctors who promote good germ hygiene protocols. They want so hard to make light of the virus that has killed over 600K Americans that they would add outright murder to their karmic ledger to see it do the job of population decimation.

I find that appalling when I consider it in such stark terms, and can't quite understand how others don't, unless they fathom some reckoning where some deaths and suffering somewhere mean it's avoided in some other safe zone where one can pretend to be--but no. That really isn't how exponential epidemiological spread works. Your safety lies exactly in your making good decisions, and always making them because what you do for others is also good for you. If you understood the science, you personally wouldn't take this so lightly as DeSantis is so very publicly doing. And given his education, he shouldn't and couldn't be this stupid.  So what possible moral guess of his character could that leave us with, but one so bad as to never wish him near power ever again?

*I know, it's not a week ago I also featured a Republican beer koozie in my post. This is because the GOP has become, unequivocally, the "Hold my beer" party.

"Uncanny Valley Girl" is so great