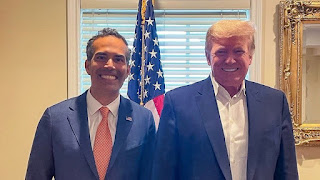 After the ass-kissing to try and get an endorsement from Trump was over, all George P. Bush has got is the taste of Trump's ass and these fabulous and not at all cringe beer koozies: 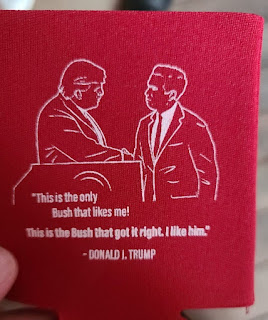 Let's face it, you can't beat the balls to the wall lunatic loyalty of the guy who was going to sue several different states for not running their elections in a way that would have helped Trump win. All George P. Bush offered was, I dunno, another opportunity for Trump to humiliate a member of the Bush family?

It's very sad and also funny.

UPDATE:  And I'm just going to tuck this in here because I also find it a little sad but also kind of funny, George P. Bush debased himself for the man who said horrendous things about his own mamma (just like Ted Cruz has done about the man who said awful things about his father and his wife, come to think of it) but mmmmmaaaaayyybbee a Trump endorsement doesn't necessarily get someone over the top since, you know, the thing where he lost the 2020 election and incited an insurrection. Even in Texas.

But you know. Paxton has that incumbency working for him, plus the Trump endorsement. Plus being under indictment since 2015 (I dunno, he seems to be making it work for him), so Bush is still probably losing this primary. It's a complicated goddamn party right now.