It's Bipartisan, If You're Into That Scene

Today, I was asked to serve on the bipartisan January 6th Select Committee and I humbly accepted. When duty calls, I will always answer. https://t.co/MszEBc0V7I pic.twitter.com/flIdSfYzZV

Not that I want to give any energy to the narrative that the Select Committee is/isn't bipartisan or whatever, but Kinzinger is a good choice because he seems to really get that what happened on January 6th was a national security crisis; and the duty of the House is not something to do with Republicans vs. Democrats, but something to do with actually investigating an attack on the Capitol. Where members of Congress actually work. It still floors me that this can even be spun as being a "partisan thing". Domestic terrorists breaking windows and invading the building while duking it out with law enforcement and while Congress was in session for an important constitutional function is a big fucking deal--end of story.
Rep. Kinzinger uses the word "non-partisan"--and that may be the better way to look at it. Facts don't have to be spun, aren't biased--they just are. Addressing the findings in an unspun and unbiased way is helpful: but make no mistake--this was a Republican party problem. Which actually should mean that, instead of sweeping it under the rug, they should want to forensically understand what the hell went wrong. Why and how did people get the idea this was what was warranted? Charging in, fighting with Capitol police? Investigating it is responsible, and reviewing what inflammatory language and damaging lies encouraged this and even holding some people accountable in necessary. Republicans have an interest in being a part of this process; but many have simply abandoned the idea that there's something going on here, besides politics.
Kevin McCarthy is chief among those who have headed for the exits. His "we'll do our own investigation" nonsense is absurd when some of his number think investigating means concocting new and imaginative conspiracy theories regarding antifa and the FBI (oh, natural allies in overturning elections and planning coups, them) . McCarthy can even try and tell you that somehow, chip off of the old block Liz Cheney and Adam Kinzinger just aren't conservative enough for him.
McCarthy says that Kinzinger buys into Pelosi's "pre-conceived narrative".  That violating our tradition of a peaceful transfer of power is bad and that understanding that power flows from consent of the governed which we determine via elections, not just an unruly mob that are still being cossetted by cowards like McCarthy is vital?
(Um, that "pre-conceived narrative" is called the Constitution, Kevin. You swore an oath to it. Try to keep up, especially since you are so desperately hungry to be Speaker of the House that you posted this cringe to GETTR. 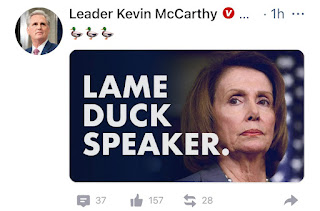 Before calling Pelosi a "lame duck", try being any kind of capable Minority Leader first--because at this rate, the Freedom Caucus will still consider anyone else if they attained the majority because you empowered them, fed them, and never led . The people who get new seats in that reality are not going to be for you. Bet.)
It doesn't matter to me that Kinzinger is a Republican so long as he cares about finding the truth. That's what matters. But that he, like Cheney, is a Republican and participating at all given the weird Omerta thing they've got going is brave for them and demolishes the idea that this can't be a bipartisan (or non-partisan) endeavor.
Posted by Vixen Strangely at 12:05 AM