What I Cannot Swallow 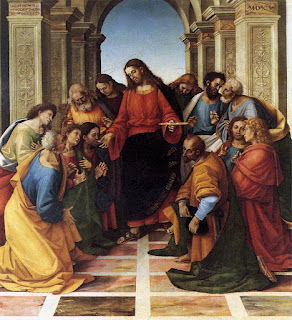 The US Catholic Bishops would like Joseph Robinette Biden, President of the United States and observant Catholic, to be barred from the sacrament of communion because he holds, as a matter of conscience, that other people should also follow the dictates of their conscience with regard to the medical termination of pregnancy.

I am unbaptized and non-believing, so I can't speak for the practice of communion as a Christian, but I studied the odd bit of theology. Sharing in the body of Christ is a reminder that God so loved us, he became flesh, and we are closer to him through that gift. In the Bible, Christ asks us to recognize that we share oneness in the body--what you do to anyone, imagine you do to Him. The leaders of the Church in America are denying a member of their body communion with that body. They are cutting him off because he cares what happens to female-bodied people trying to access reproductive health care.

I don't know how significant it is to receive communion in the form of a religious ritual, because to me, communion is when you empathize with other human beings you meet along the way--and believe me, Biden does this. He is a gregarious, people-oriented person who can't not feel for others. I think the Church is actually diminished when it stoops to this kind of low political pettiness. I would greatly prefer it leave Biden's conscience alone, and consider the Church's own.

Thank you for saying that. I agree. Now that i am old and useless, nobody bothers me with their religious views anymore.
Don't those people have something better to do? What do they hope to gain?
They should mind their own business.