While They Were in the Nursery 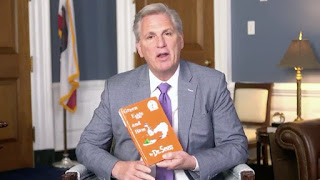 Things had come to such a petty pass when last I blogged that I took a small break in the hopes that the revelation of so much smallness would not, actually, shrink my spirit like cotton trousers in a warm soak. The American Rescue Act passed, and not a single Republican wanted dick to do with it. Dr. Seuss they have time for. (I hear there there are more important things.) Mr. Potato Head they have time for. They will make time for lecherous cartoon skunks--before they bother with the needs of the American working class, who have been battered by the COVID-19 recession, and have been alternately told they are "essential" and treated like they are expendable if not disposable, and small businesses that need a helping hand.

But when I saw Thursday night what we'd been missing for so long, I found myself back on my blogular bullshit. We have an adult in the White House now and the Republicans don't know how to act. Our dad kicked their dad's ass on the electoral playground and now he's kicking him in the nuts every chance he gets and they're big mad, you guys. I mean, sure, Biden is more popular than Trump ever was, but like, Trump was president, um, too? And did a job of it, right? Very productive!

And while we're at it, where's Trump's participation trophy for throwing money at pharmaceutical companies to get a vaccine going and only getting like, half a million people killed? 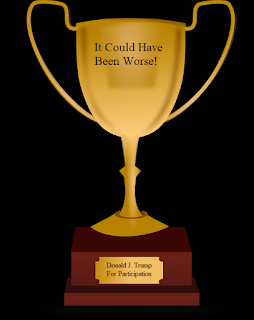 Let's call it the Donald J. Trump "What Have You Got to Lose?" trophy and let him stick it wherever he puts his newspaper clippings about getting nominated for the Nobel Prize, right by the portraits of himself he bought with his fake-charity slush fund money and his also fake Time Magazine covers, because the real ones aren't always that flattering.

But I've already spent too much breath on Trump, haven't I? (Hasn't everyone?) The real story is how the GOP had no after-Trump plan, and now they have nothing at all but "not whatever Democrats want". And since Democrats just mostly want good government and our people not dying, broke, or sick, um, what they want looks bad, actually.

Also they want to suppress people voting because of course they do. They've given up on expanding their map and have definitely reached the "quiet parts out loud" part of their desperation--but it's okay, because they kind of think the Supreme Court is with them on this. I mean, compare what the representative from AZ said with Buckley and Bozell from another era. (The sins of the fathers, etc.) They can't win on the kitchen table talk, so they want a culture war.

But what does that even mean, anymore? When Marco Rubio sides with an Amazon union bid because of culture war--it means less than nothing. When alt-right gadfly Milo Yiannopoulos declares himself an ex-gay for attention, we get a little nearer to whatever minute we're in now on the conservative clock (or check with Andrew Sullivan, still gay but basically a phrenologist).

The conservative case seems to be a whole battle with the entire arc of history. (For everyone bending the arc of history towards justice, there's these pricks, riding athwart with dragging spurs yelling "stop".) The concept of time, even. The idea of getting out of the nursery. It's meatheads who practically swallow their tongues in the face of men who aren't their kind of manly and women who aren't their kind of feminine, families that don't look like the dolls that came with their dollhouse playset and human beings that aren't easily labeled. Who might be from somewhere else or even have a different idea of God.

So here's my take--I don't want unity with toddlers who break their toys and have tantrums when they don't get things their way, and who don't see others, for example, atheist, feminist and queer, or in any other way multicultural or diverse, or divergent in perspective, as deserving of respect or recognition. The GOP lost me when I was in the nursery, and so were they--when the Silent Majority of Nixon gave way to Reaganism, trickle down, and the culture war I always kind of thought was a little bit personal--against me.

They are still in the nursery, and have opinions about, I guess, reefer madness. But we need to move on, even if Republicans aren't coming. So I just don't give a shit about unity or bipartisanship. I care about doing what works and protecting real people, not cartoon characters and plastic spuds. I hope Republicans get over their Trump-Daddy issues eventually, but they can't hold up fucking progress.

From tRUMP to Biden.
This past year has been a long but transformative decade.

If you haven't studied the history of communism, wake up.

First they erase your distant ancestors ("THEY STOLE THE LAND!")

Then they erase your closer ancestors ("PULL DOWN THE STATUES!")

Then they erase your parents ("SHUT UP BOOMER!")

Then they erase your childhood ("CANCEL THE MUPPETS AND DR SEUSS!")

Then they erase you.

Not how it ever worked. Recipe for fascist indoctrination, though. Maybe you're the monster in the story? Perhaps it is more M Night Shamalan than one would care to admit?